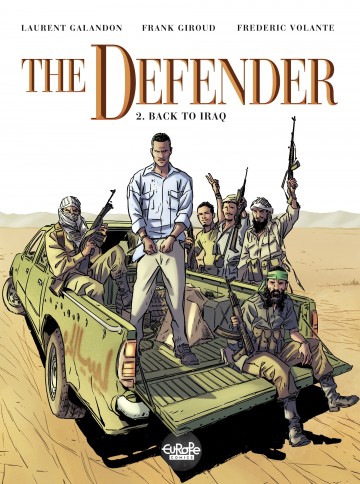 “Open your eyes, smart and honest man: evil and the divine coexist in each being”. The proofs of Zeinab’s innocence that Leo brought back from his first trip to Irak turn out to be fake. With his reputation and truth at stake, the Defender needs to unravel this one fast. He discovers a troubling link between Zeinab and a French agrochemical company which had manufacturing premises in Irak under the reign of Sadam Hussein. One of them close to Boussara, where Zeinab (or was it her twin sister?) was supervising prisoners. Back in Irak, Leo is learning a bit too much for his own good – and his own safety. In the meanwhile, Poljack is closing in onto the veiled woman protected by Leo. An old flame met in a training camp in Lebanon, from the time where both were trying to change society through bombs and anarchy; a ticking bomb over Leo’s head. ***** This second volume is definitely picking up pace and interesting intrigue. Leo’s past reveals a more complex personality and a search for a life purpose ending up in his calling for justice. And the central plot revolves around the recent-ish Iraki history, even more troubled by Western industrial vested interests and dark methods. An intriguing geo-political saga.

Celebrity lawyer Leo Sully-Darmon must return to Iraq to prove the innocence of his client, a woman accused of crimes against humanity, despite having increasing doubts himself about her role in these events. While there, he finds shocking evidence of a massive coverup and, under pressure from all sides, is compelled to reveal secrets from his own dark past.

Continue summary
The Defender- Volume 2 - The Defender 2. Back to Iraq - Giroud - to read online on izneo or download on your iOS and Android tablet or smartphone.

Read the album
Add to cart
Added to your cart
V.3 - The Defender
(1)
$5.99
The stakes rise for hot-shot criminal defense attorney Leo Sully-Darmon and his client, an Iraqi woman accused of crimes against humanity, when "LSD" decides to go after the real culprit, a French industrial group that illegally manufactured chemical weapons during the Gulf War. Will he find the evidence he needs to take down Big Business while keeping himself and his client out of harm's way? Meanwhile, the press isn't far behind, including one particularly nosy reporter with some dirt on Leo's past... The thrilling conclusion to the three-part series.

The Defender- Volume 2 - The Defender 2. Back to Iraq - Giroud - to read online on izneo or download on your iOS and Android tablet or smartphone.

Read the album
Add to cart
Added to your cart
V.1 - Babylon
(5)
$5.99
If you have a problem, if no one else can help, and if you can find him, Max Ferlane is your man: a good man with skills a bad past has left him. Now he's trying to leave that bad life behind, put those skills to good use. He's in the Congo rescuing a young girl from an arranged marriage when an old employer turns up: the Babylon Agency, specializing in high-profile political exfiltrations. Max is forced into a different, far more dangerous mission that will take him deep into warring jungles and his own past mistakes. For Max's PTSD hallucinations are only getting worse...
Close