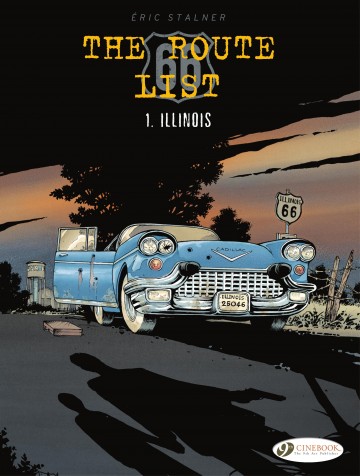 The Route 66 List, vol 1 is written and drawn by Éric Stalner, with Jean-Jacques Chagnaud as colorist. It's a story about a man who recently lost his wife in a suspicious accident, the man sets out with his son to find answers. This is a book with quite a few components; there's spying, cold war politics, and a serial killer. It's only in the very last pages that the reader gets any sense of how these things are connected. The action up to that point doesn't really have the impact it could have had, simply because it's not clear what the stakes are or exactly what the characters are striving towards. Even with that critique in mind, it's still an entertaining read. I especially felt that the inclusion of the son in the story was very effective. Even if you don't really know what the father is up to, you still care about the fate of the kid. The artwork was also good. It has kind of a retro feel to it, which is fitting since the story is set in the 1960s. I think this story really has a potential to improve in subsequent volumes, with the framework of the plot finally being laid out at the end of this one. I wish it could have happened a little earlier in the story though, the reader is left in the dark for a bit too long.

In JFK’s America, halfway between spy thriller and noir novel, the tragic road-movie of a father and his son, revolving around a mysterious list that everyone’s willing to kill for. 1961, Illinois. Alex Poliac buries his wife Alice. That evening, he and his son flee their home. Not because he is a suspect in Alice’s death, but because a serial killer – The Clown – is prowling the state, and Alex knows how he picks his victims. A rough meeting with Laura, a friend of his wife, brings more questions: was Alice hiding something, with her mysterious phone calls and unexplained absences? Was her death really an accident?

Read the album
Add to cart
Added to your cart
V.5 - The Route 66 List
(0)
$5.99
Rob’s found his father, alive and moderately well after four years of physical and mental torture. But the happy reunion is cut short when the Clown makes contact with them. Unexpectedly, it’s to offer them a deal: Alex will do one last job for him, then father and son can go, free and with the assurance of never being bothered by the KGB again. Inevitably, no one really believes the offer, and the last round of a deadly game begins …
eazyComics