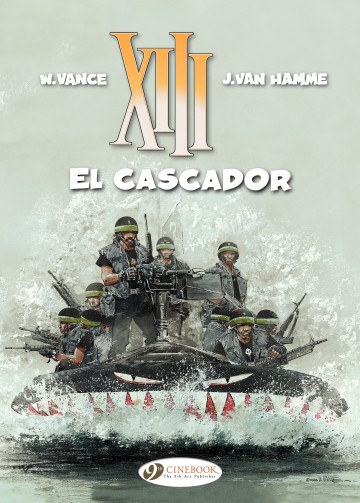 Captured and imprisoned in the Roca Negra fortress, XIII is being tortured by the sinister Colonel Peralta. But, for all his pain and suffering, he’s also in the same building as Maria, the woman who may be his wife. And they have plenty of dedicated, resourceful friends outside… as well as at least one traitor. Still unsure of his past, Jason McLane will have no choice but to become the man known as “El Cascador” to clean up Costa Verde once and for all.

Read the album
Add to cart
Added to your cart
V.23 - XIII
(2)
$5.99
Still with Annika, Jason McLane has the documents his godfather left for him to find in the Netherlands deciphered. Once translated, the text offers revelations of breathtaking importance – enough to change the geopolitical map for ever. But the killers sent by the Mayflower Foundation are still after them, while in Afghanistan, Jones and Carrington’s situation goes from bad to worse. XIII will have to be on his best game to sort it all out – but at what price?
eazyComics

Read the album
Pre-order
Added to your cart
Kivu
(0)
$11.99
A powerful and thrilling adventure in the heart of one of the worst places on this world – a potential paradise turned into hell by human greed and barbarity. An uncompromising denunciation of the tragedy of Kivu. The province of Kivu in the Congo is rich in rare and precious minerals such as coltan, which is vital to our modern technology. However, that wealth is coveted by so many, within the Congo or abroad, that the entire region is a permanent bloodbath. François Daans, a young Belgian engineer working for an unscrupulous corporation, arrives in Kivu. His encounter with a young girl, survivor of the latest massacre, will be an eye-opening experience and force him to pick a side …
New

Read the album
Add to cart
Added to your cart
Thorgal Vol. 0 - The Betrayed Sorceress
(0)
$8.49
eazyComics

Read the album
Add to cart
Added to your cart
Story Without a Hero
(0)
$8.49
eazyComics