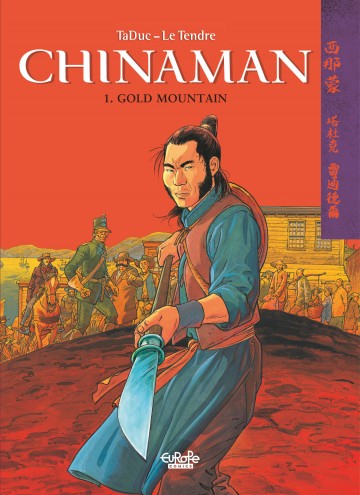 In the second half of the 19th century, a Chinese man wanders the plains of the American West. In the first volume, John Chinaman lands in San Francisco, tasked by the Elders of Canton with disciplining the local Triads. But this mission will be his last. From now on, his fate will be irrevocably tied to America's westward expansion.

This digital comic is available in english version. The following reading modes are available with the izneo reader:
Chinaman- Volume 1 - 1. Gold Mountain - Serge Le Tendre - to read online on izneo or download on your iOS and Android tablet or smartphone.

Read the album
Add to cart
Added to your cart
V.9 - Chinaman
(1)
$5.99
In this conclusion to a tense two-parter, John Chinaman reaches Tucano with two friends by his side and a gang of outlaws on their heels who'll stop at nothing to recover the cash from a bungled robbery. John's hopes of keeping a low profile go up in smoke as Zed continues his cheating streak, and Horace hides out at a brothel, trying to start a new life as a bouncer. Meanwhile, John's boss, Mr. Byrne, is going out of business, and has one last delivery for John to make: a prize Longhorn bull. Life sure can get complicated when you have friends!

Read the album
Add to cart
Added to your cart
V.1 - Chinaman
(4)
$5.99
All about Lucky Luke!
All about Europe's favorite cowboy!

Chinaman- Volume 1 - 1. Gold Mountain - Serge Le Tendre - to read online on izneo or download on your iOS and Android tablet or smartphone.
eazyComics

Read the album
Add to cart
Added to your cart
V.2 - The Bleiberg Project
(6)
$8.99
Jeremy Corbin and his two new BFFs, i.e. the Mossad and CIA intelligence agents assigned to protect him, travel to Belgium to pursue their quest for answers regarding the identity and plans of the secret and highly influential organization known as The Consortium. In between dodging brutal attempts on their lives and getting to know each other better, the trio uncovers more terrifying information about the Bleiberg Project carried out in Nazi concentration camps during WWII, which was not as unsuccessful as previously thought and which could very well present a new and much greater threat.
eazyComics