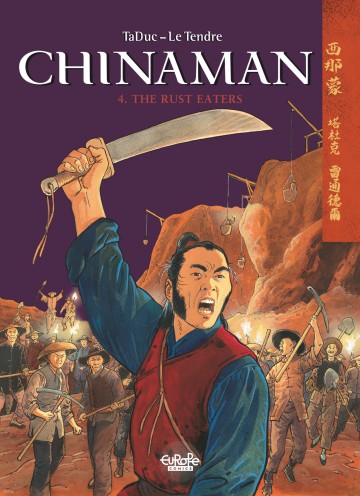 When Chinaman saves Li, a young cook, from a pair of drunken Irishmen, little does he realize he's about to become embroiled in much a larger struggle. For Li is one of a group of Chinese laborers brought in to help build the transcontinental railroad—much to the resentment of the Irish who preceded them. And they aren't the only ones after Chinaman: Sing, whom he dishonors and displaces as headman of the Chinese group, also nurses a grudge. These tensions come to a head in a fiery, balletic battle as a young Samuel Clemens looks on, witness to history.

This digital comic is available in english version. The following reading modes are available with the izneo reader:
Chinaman- Volume 4 - 4. The Rust Eaters - Serge Le Tendre - to read online on izneo or download on your iOS and Android tablet or smartphone.

Read the album
Add to cart
Added to your cart
V.9 - Chinaman
(1)
$5.99
In this conclusion to a tense two-parter, John Chinaman reaches Tucano with two friends by his side and a gang of outlaws on their heels who'll stop at nothing to recover the cash from a bungled robbery. John's hopes of keeping a low profile go up in smoke as Zed continues his cheating streak, and Horace hides out at a brothel, trying to start a new life as a bouncer. Meanwhile, John's boss, Mr. Byrne, is going out of business, and has one last delivery for John to make: a prize Longhorn bull. Life sure can get complicated when you have friends!

Read the album
Add to cart
Added to your cart
V.1 - Chinaman
(4)
$5.99
All about Lucky Luke!
All about Europe's favorite cowboy!

Chinaman- Volume 4 - 4. The Rust Eaters - Serge Le Tendre - to read online on izneo or download on your iOS and Android tablet or smartphone.
Coming soon

Read the album
Pre-order
Added to your cart
V.2 - The Tiger Awakens: The Return of John Chinaman
(0)
$5.99
You’ve followed his adventures through the Gold Rush, the building of the Continental Railroad, and the taming of the frontier. Now Chen Long the Chinaman, the triumphant creation of Olivier TaDuc and Serge Le Tendre, is back for his greatest adventure of all: finding out he’s a father. Twenty years after his violent past drove away his true love Ada, the Civil War, prison camp, and opium have left Chen Long a broken-down shell of his former proud self. Can the tiger rise to save his son? The second part of the fitting conclusion to an epic series that explores forgotten pockets of western history.
eazyComics