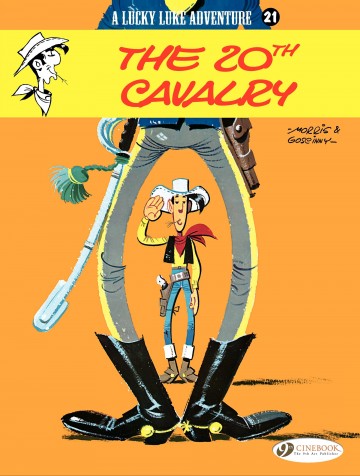 The Cheyenne are convinced that newly-arrived settlers have been killing the buffalo they traditionally depend on. When the Native Americans surround the 20th Cavalry’s fort, Lucky Luke realises that someone who bears a grudge against Colonel McStraggle has conveniently provided them with firearms. Worse, the traitor also knows the layout of the fort. Lucky Luke does his best to try and break the deadlock before the soldiers starve. As in other “Lucky Luke” volumes, readers discover different aspects of the United States’ conquest of the Wild West.

This digital comic is available in english version. The following reading modes are available with the izneo reader:
Lucky Luke- Volume 21 - The 20th Cavalry - René Goscinny - to read online on izneo or download on your iOS and Android tablet or smartphone.
Coming soon

Read the album
Pre-order
Added to your cart
V.79 - Lucky Luke
(0)
$8.99
Passing through New Orleans, Lucky Luke stumbles upon a heated argument between two steamboat captains. The argument soon turns into a wager: whichever boat reaches Minneapolis first after steaming up the Mississippi will win the exclusive rights to the route. Captain Barstow quickly invites Luke to travel on his Daisy Belle, fearing that his opponent will cheat. And while he’s not wrong, the biggest danger to both boats remains Old Man River himself …
Coming soon

Read the album
Add to cart
Added to your cart
V.1 - Lucky Luke
(38)
$8.99
All about Lucky Luke!
All about Europe's favorite cowboy!

Lucky Luke- Volume 21 - The 20th Cavalry - René Goscinny - to read online on izneo or download on your iOS and Android tablet or smartphone.

Read the album
V.34 - Asterix
(0)
Goscinny's drawings are as brilliant as ever and the packed pages of this 50th anniversary volume will delight devotees

Read the album
Asterix: Asterix and the Vikings
(0)

Read the album
Asterix: How Obelix Fell into the Magic Potion
(0)