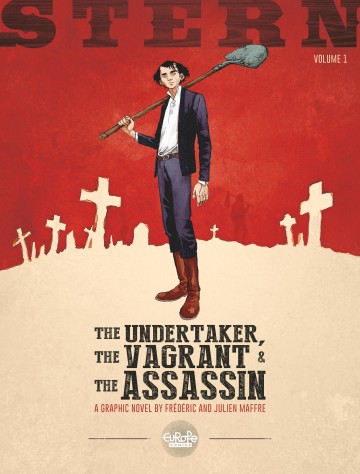 Stern, vol 1 is written by Frédéric Maffre, with artwork and colors by Julien Maffre. It's a story that takes place in America's wild west. Stern is an undertaker who discovers that a person he's about to bury was in fact murdered. I liked this book. It has interesting characters and good dialogue. Every character has both flaws and strengths, much like in real life. It's very nuanced in that way, the story is not divided into good guys and bad guys. It's nice to see a western where the characters really come alive, away from stereotypes. But I felt like the resolution of the murder mystery was a bit basic though. I would have wanted a more elaborate ending. The conclusion connected with the flashback in the beginning in a nice way, but it was still a little disappointing. The artwork was nice. A lot of scenes really seem to capture the wild west, and there's almost a sort of poetry to the artwork (as well as to the writing). Stern, vol 1 is a welcome addition to the western genre. Hopefully this series can keep its strengths for subsequent volumes, as well as maybe sharpen the storytelling a bit when it comes to the plot.

From the title and the cover of the comic book, one cannot help but picture the mythical scene of the Leonian cemetery in the Good, the Bad and the Ugly. But Elijah Stern does have a name (and no, he's not Jewish) even if he's not often asked, and he's chiefly far more intriguing than Clint Eastwood. The massacre of the town of Lawrence, Kansas, in the early morning hours of 1863 was a bloody episode of the American Civil War. Lawrence was abolitionist, a crime in the minds of the bushwhackers, irregular, grudge-bearing roughneck pro-Confederate fighters from Missouri, whose actions targeted the rural areas and the enemy's rear lines while carefully avoiding the front. That day, a teenager with a brandished pistol helplessly witnessed the traumatic killing of a woman before the very eyes of her young son. 19 years later, Elijah Stern, a spindling, closemouthed, erudite and non-violent undertaker is summoned by a widow to dissect her late husband's cirrhosis, admittedly illicitly but for a good fee. But Stern discovers that his client, Charles Bering, has been suffocated. Strange character, too, this Bering: a Southerner rallied to the Northern cause, the John of a prostitute high on laudanum immediately accused of his murder, the former best friend of an aristocrat who has come to piss on his grave, and, finally, only seemingly mourned by a drunken piano virtuoso. As the corpses start to pile up and despite a natural reluctance by definition essential to his profession, Stern soon finds himself involved in the quagmire. He will be up to his neck in it much more than he first thought. “But when he sat, so ghost-like, in his chair,/And they had closed the dungeon o'er his head, /The Eye was in the tomb and fixed on Cain”, Victor Hugo, Poem The Conscience. “In a land where life has no value, death might have a price”, would have added Sergio Leone. But not always the price one may think of. The brothers Frédéric and Julien Maffre have created with Elijah a very atypical western character, breaking the codes of the genre. An absolute must!!!

1880. Kansas. Elijah Stern, the local undertaker, leads a calm and solitary life, until one day he is asked to carry out an autopsy on a man found dead in a brothel. Taking on the role of forensic pathologist, he discovers that the man had not died of natural causes and finds himself involved, against his better wishes, in the middle of a bonafide investigation. But Stern has no idea that the key to this case lies in his own past...

Continue summary
Stern- Volume 1 - 1. The Undertaker, the Vagrant, and the Killer - Frédéric Maffre - to read online on izneo or download on your iOS and Android tablet or smartphone.
eazyComics

Read the album
Add to cart
Added to your cart
V.3 - Stern
(5)
$8.99
Much to Stern's consternation, the small town of Morrison is preparing to celebrate Christmas, far from the gunfights that are commonplace in the Wild West—a West that is becoming tamer by the day. But the town is about to welcome a member of the real West: Colorado Cobb, a gentleman gunslinger whose adventures are a novelist's dream, but which have earned him a number of enemies. After tracking him down, a few vengeful gunmen will trigger a bitter chain of events, and the community caught in the crossfire will be forced to pick a side.