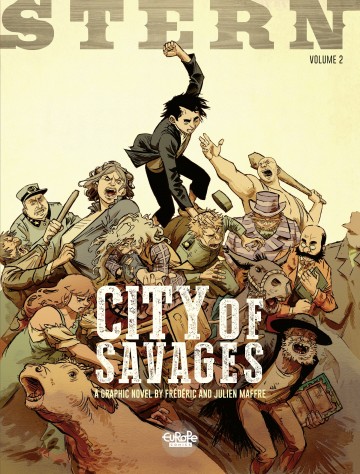 Though he may well be an undertaker, Elijah Stern is a man of culture. When he learns that his supply of literature has dried up he decides to ride out from his small town to Kansas City, where he knows there is a small bookstore, in order to satisfy his reading addiction. A simple task, right? Wrong. No sooner does he arrive when he is mugged. In his efforts to track down his attackers, Stern will cross paths with old friends, new enemies, and, even worse, his ex-wife..."Having read Stern volumes 1 & 2, I can honestly say that while the stories were nothing at all what I was expecting, they were outstanding reads that I couldn't stop reading once I'd started." The Pullbox

Read the album
Add to cart
Added to your cart
V.3 - Stern
(0)
$8.49
Much to Stern's consternation, the small town of Morrison is preparing to celebrate Christmas, far from the gunfights that are commonplace in the Wild West—a West that is becoming tamer by the day. But the town is about to welcome a member of the real West: Colorado Cobb, a gentleman gunslinger whose adventures are a novelist's dream, but which have earned him a number of enemies. After tracking him down, a few vengeful gunmen will trigger a bitter chain of events, and the community caught in the crossfire will be forced to pick a side.