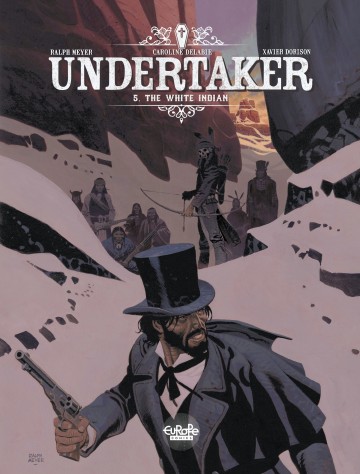 A scandal difficult to hide. A dead son, who had been kidnapped by Apaches 10 years earlier and mentally broken to become the White Indian. An extremely rich, “visionary” – to understand in the Far West sense - and not so young mother’s broken heart, threatening to set her second marriage back until the heir’s funerals have been properly conducted. The groom-to-be, Sid, is oddly an old acquaintance of Jonas Crow, from the troubled time of a youth gang. ***** Jonas is on his own. Lin has gone back to China to live with her son, finally at peace with herself; as for Rose, deciding she was stronger and less of a romantic fool than Jonas, she left the handsome undertaker to his gallows humour and demons. For our dark hero, bleeding wards off thinking, heavy drinking and waltzing with a vulture compensate for the loss of the beautiful English gal. Up to a point. And because Sid offers to wave Jona’s arrest warrant if he joins him on the body retrieval mission. Mission that Salvaje, the last Apache warrior, will make extremely risky and astoundingly eye opening. Jonas will question his vocation as an undertaker, the definition of victimhood, the notion of freedom and happiness, sex equality and the very concept of manhood. “You are an odd man, Jonas Crow. Neither dead nor truly living. You do not truly like your friends, you do not truly hate your enemies. You are nowhere.” ***** The White Indian is the beginning of new adventures for Jonas, soul transforming ones, while we learn more about his past. Sometimes, new chapters don’t add much to a story, but the White Indian enriches the depth of the character, widens the storyline, blesses us with gorgeous illustrations and colours, and goes deep into Indian tribes’ psyche. The Undertaker is definitely still going strong.

Undertaker, vol 5 is written by Xavier Dorison, the artwork is done by Ralph Meyer, with colors by Meyer and Caroline Delabie. This series is set in the wild west and follows undertaker Jonas Crow, he is wanted (under a different name) for crimes he supposedly committed during the Civil War. In this installment he's tasked with recovering the body of a man held hostage by the Apaches. I really like this series, and this volume maintains the high quality of the previous ones. The suspense steadily builds throughout the story, loyalties shift and stakes get higher and higher. This is really a showcase of good storytelling. Jonas Crow is also a very well crafted character. He's definitely a kind of anti-hero, mostly looking out for himself. I feel like this makes it more interesting, as opposed to having a typical good guy as protagonist. When it comes to the art, I have to say that Ralph Meyers drawings are the perfect companion to Dorisons writing. The warmth and humor of Meyers style really elevates the story. An artist with a more dry approach wouldn't have been as satisfying, in my opinion. With two creators combining their talents to great effect, Undertaker is a series everyone should check out.

Lin and Rose have gone their separate ways, so Jonas Crow is left alone with his hearse and Jed, his pet vulture. Winter has set in and there's plenty of work to do—plenty of bodies to bury. When a childhood friend, Sid, looks him up and offers him a dangerous job, Jonas eventually agrees to it. Time, however, changes all things, loyalties included. Sid may not be trustworthy, but he was right about one thing—Jonas is the only undertaker in the Old West crazy enough to go after a corpse in Apache territory.

Continue summary
Undertaker- Volume 5 - Undertaker 5. The White Indian - Delabie Caroline - to read online on izneo or download on your iOS and Android tablet or smartphone.

Read the album
Add to cart
Added to your cart
V.6 - Undertaker
(1)
$8.99
After Rose Prairie leaves him, Jonas Crow sinks deep into a hole. That's when he's brought on for a special assignment by Sid Beauchamp, a friend in misfortune from his youth and now the sheriff of Tucson: to recover the corpse of Caleb Barclay, enslaved and tortured by the Indians. But things get complicated when it turns out that Caleb wasn't a slave at all, but had married into the Apache tribe, and he was killed by none other than Sid himself. With Sid and his well-heeled bride-to-be at the helm, Tucson seems on the verge of great things... But as a blizzard hits, so do Jonas and Caleb's widow, the fierce Salvaje, and bullets and vengeance storm the winter skies of the Arizona desert.

Read the album
Add to cart
Added to your cart
V.1 - Undertaker
(8)
$8.99
Become a super reader
Write reviews and get comics for free!

Undertaker- Volume 5 - Undertaker 5. The White Indian - Delabie Caroline - to read online on izneo or download on your iOS and Android tablet or smartphone.
eazyComics