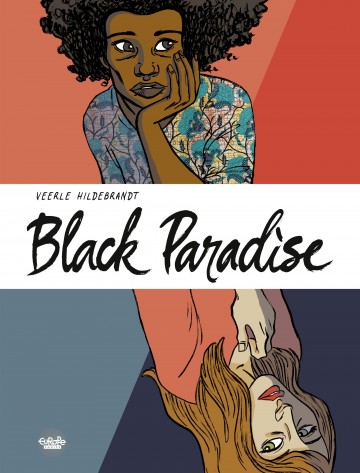 Expatriation via an international company is often professionally seen as a golden opportunity, a money-making or career- advancement move. Families highlight the chance to live in a different country and a very unique experience in the children’s lives, or even – for the “adventurous” ones – a new place they can also call home. Expatriation can also be hell when the family struggles to settle and fit in, or the pressure on the working spouse becomes too high; the family relationships might be stretched to a breaking point, not to mention the political instability and the risk to personal lives. Expatriation can be anything in between. Black Paradise is semi-autobiographical as the author, Hildebrandt Veerle, spent time in Germany and Nigeria in her childhood in the early 1990s. The colourful illustrations and the numerous close-ups on faces depict an atmosphere and most of all mixed and changing feelings. The luxurious sides of such a lifestyle and material perks (swimming pool, a driver and a maid, the purchase of a horse or a bungalow on the shore of an amazing deserted lake, the access to expensive international schools) do make up for the immediate downsides (leaving friends and pets behind, the partner’s career being put on hold, the feeling of being lost and the need of making new friends in a very different place indeed). Black Paradise does not shy either on darker aspects: the relationship with local companies / officials / suppliers does sometimes involve going against one’s moral principles; some stay-at-home mums enjoy the protected bubble and sometimes lash out on not-so-kind comments towards the local population; local women can be very pretty and a bit too attentive to the head of the family, and the local political situation can be risky and explosive. Black Paradise is an enjoyable graphic novel on expatriation, in a way almost viewed through the eye of a child even though it is not narrated that way, describing a life changing experience for a whole family.

Hans Wagner decides to move with his wife Katie and daughter Lisa from Germany to Nigeria, where he has been offered a well-paid job. The lifestyle that comes with it is a nice extra: they'll have a housekeeper, there's a good international school, and their daughter will even be able to join a horseriding club. However, shortly after their arrival in Lagos it turns out that life there is less paradisiacal than they'd hoped...