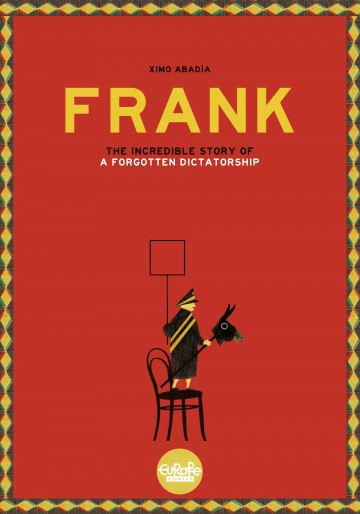 Frank The Story of a Forgotten Dictatorship

“Frank, a boy with a tantrum”, says Ximo Abadía in an interview to RTVE, the Spanish equivalent of the BBC. "I'm not trying to dedicate a book to Franco, I'm trying to make a satire of the character. I was mainly interested in making a juvenile book for children". Frank is a tyrant, but a tyrant with a very particular obsession: squares. He loves squares and hates triangles, circles and rectangles. And he also hates people who prefer triangles, circles and rectangles. He goes to Africa, phones two dictators (looking very much like Hitler and Mussolini), seizes power and makes everyone’s life utterly miserable until the day he dies, nearly 40 years later. Ximo Abadía explains the square metaphor: "Franco's ideals were "Homeland, Catholicism and family", an ancient, squared mind. He did not respect other mentalities, which he captured as circles, triangles and rectangles". Franco’s dictatorship is hardly taught at school, regrets the author, who truly believes children and peoples cannot grow up without knowing their pasts. Ximo Abadía is considered as one of the best current illustrators in Spain. His blues, reds and yellows are beautifully strong and have a definite feel of Spain. With just a few shapes and a few colours, the author manages the impossible, to “make the reader choose between two paths, a path from a fiction book or understand it is a real story”, and to draw a great book that is “very simplified, very iconic”. “Frank” is an extremely unusual book, to offer every child and to read together as a family.

"In order to see the future, one must remember the past." "Frank" is a biographical retelling of Spanish dictator Francisco Franco's rise to power, brought to life across the book's beautifully designed pages. Here, author Ximo Abadía approaches a subject that is still taboo in Spain: the weight of a dictatorship that left its mark on the country for over 30 years.