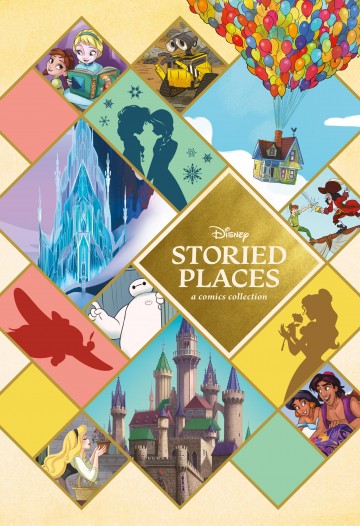 A collection of comics stories built around the magical locations of animated feature films from Disney and Pixar. Visit castles, oceans, jungles, circuses, cities, deserts, and more--set before, during, and after the films! Disney invites you to take a tour through the myriad places you know and love--from the castles of the Disney Princesses to the diverse cities across the Disney film worlds. Run wild through the jungle, then dive deep into the ocean, cross the warm savannah, and drop into amazing cities! Slide into the kingdom of Arendelle and witness the strength of sisters as you follow Anna and Elsa from childhood to adulthood. Venture through the world of Disney and Pixar animation--you won't believe who you'll run into: Peter Pan, Simba, Dumbo, Stitch, the Aristocats, Wall-E, Nemo, Mike and Sulley, and many more! Marvel at the glorious castles of Disney's Princesses and follow a day in each of their unique lives! Choose your stops and take a moment to enjoy the sights around you in the wonderful worlds of Disney. This collection is a fun assortment of original Disney stories from Disney Frozen, classic Disney animated films such as Peter Pan, 101 Dalmatians, The Lion King, Robin Hood, and Zootopia, beloved Pixar films such as Monsters, Inc., Finding Nemo, Up, and Wall-E, and stories featuring each of the Disney Princesses and the places they call home!

Read the album
Add to cart
Added to your cart
Disney Mulan's Adventure Journal: The Palace of Secrets
(0)
$6.99
Follow the fearless hero on a quest to save China for the second time in story that is interwoven with pages from Mulan's own journal. An assassination attempt is made on the Emperor of China's life. Under the backdrop of the beautiful Spring Festival, Mulan must go undercover as the guest of honor at the Imperial Palace to protect the emperor. When danger presents itself in the shadows and in plain sight, everyone is a suspect. Between his family, guards, counselors, and a deadly organization called The Golden Tiger--Mulan must figure out who among them is plotting treason. And in between all the commotion, Mulan must also find a balance between being a celebrated hero and staying true to herself. In this graphic novel, pages from Mulan's own journal are woven into the adventure! As you follow the tale, you will read her thoughts as she travels from her village to the Imperial Palace, from sunrise, to sunset. Beautiful watercolor illustrations fill her journal, giving you a glimpse into the human, the warrior, the woman, Mulan, like you've never seen her before!
Close