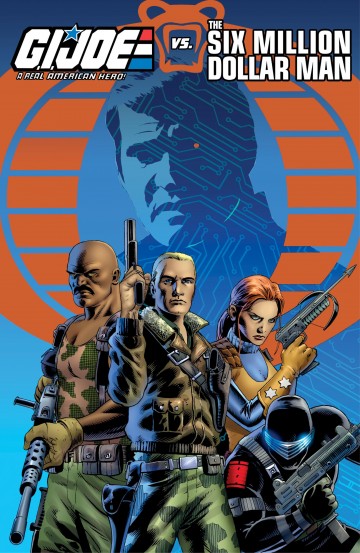 The greatest American heroes go face-to-face with the most dangerous living weapon... Steve Austin! It’s a showdown between ’70s icons–kung-fu grip vs. bionic eye! Hacked by COBRA, the Six Million Dollar Man has the JOEs in his sights. World peace hangs by a thread and Cobra Commander holds the world’s infrastructure in his venomous clutches! Do the JOEs stand a chance against the bionic man, or is he simply better, faster, stronger?

Read the album
Add to cart
Added to your cart
V.23 - G.I. Joe: A Real American Hero
(0)
$7.99
As Cobra continues its relentless onslaught on a global scale, G.I. Joe is there to meet them in kind. It’s tyranny versus freedom—heroes and villains will rise and fall, bullets will fly, blood will spill, and who and what remains when the smoke clears is anyone’s guess! A hostile takeover turns into a desperate fight for survival when Destro and Baroness are caught in a deadly ambush by Revanche Robotic's Alpha 001 Prime, who has declared war on M.A.R.S. and the Arashikage Clan! Collects issues #261–265.

Read the album
Add to cart
Added to your cart
Planet of the Apes: When Worlds Collide
(0)
$11.99