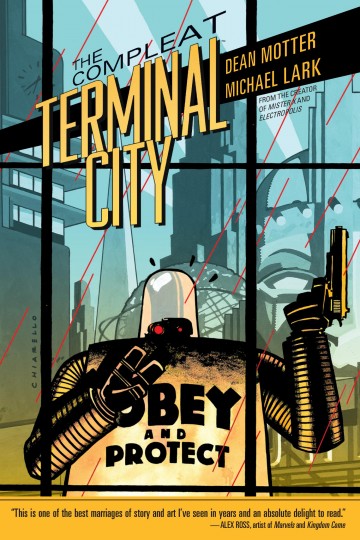 Visionary designer and comics creator Dean Motter (Mister X, Electropolis, Batman: Nine Lives) returns with the purest expression to date of his patented retro futurism! Terminal City is a place where transistor-tube robots rub elbows with old-time gangsters, where bright, shiny technologies cast deep noir shadows. Teaming Motter with celebrated artist Michael Lark (Daredevil, Gotham Central), this massive collection reprints the original series, along with its sequel, Terminal City: Aerial Graffiti! * All fourteen issues of the classic series, collected for the first time! * Eisner-and Harvey Award-nominated series! This is one of the best marriages of story and art I've seen in years and an absolute delight to read. -Alex Ross, artist of Marvels and Kingdom Come

Terminal City- Volume 1 - The Compleat Terminal City - Dean Motter - to read online on izneo or download on your iOS and Android tablet or smartphone.

Read the album
Add to cart
Added to your cart
Mister X: The Modern Age
(0)
$16.99
This digital edition collects, for the first time, every Mister X comic published by Dark Horse, including Condemned, Excavations, and Razed, along with never-before-seen behind-the-scenes material! In the retro-futuristic metropolis of Radiant City, its mysterious creator, Mister X, must protect the city and its residents as the architecture of the city that poses a danger to all those within it!