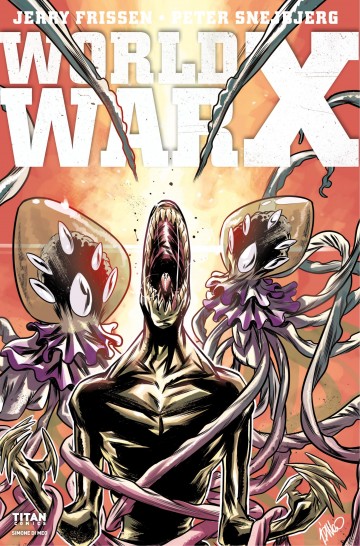 Read an excerpt
$3.99
Add to cart
Added to your cart

The moon base, 2017. An ancient sarcophagus split open to release a terrifying alien creature! In the aftermath of the cataclysmic event, all communications have been cut off from Earth. Back on Earth, Scientist Adesh Khan, along with his ex-wife Tara, teamed up with ancient warrior Helius to fight against the terrible events engulfing the entire human race! Helius told them the full story of the aliens, and gave them instructions to build the only weapon capable of stopping them. They are all on their way to convey the information to the President of the United States. Meanwhile, the scope of Jen’s true involvement is starting to be unveiled, as she controls an alien captured in the Everglades via the stone plucked from Helius’ heart! The next phase of the battle has begun, as Jen uses the stone to create a beacon from the alien, immobilizing every alien on the planet and beyond… including Helius.

This digital comic is available in english version. The following reading modes are available with the izneo reader:
Have you read the comics?
The Umbrella Academy, Locke and Key...

Read the album
Add to cart
Added to your cart
V.2 - The Fire of Theseus
(1)
$5.99
Everyone thinks they know Theseus, the great Hero of Athens. But what legend has retained is merely a web of lies, a fable to hide the truth—a truth that time was not ready to accept... It's time Her story was told.

Read the album
Add to cart
Added to your cart
Selected Works
(0)
$13.99
eazyComics

Read the album
Add to cart
Added to your cart
Rina, the Meta-Guardianess
(1)
$5.99