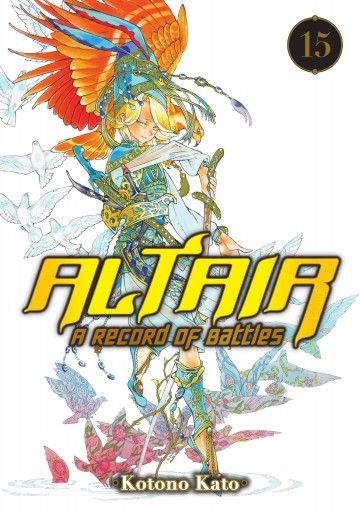 The land of Cielo is now Torqye's first satellite territory! Following the Imperial fleet's defeat in L'isolani at the hands of Venedik commander Lucio, Mahmut's victory in Cielo once again sets the gears of history in motion. With Balt-Rhein left licking its wounds, Zaganos advances his forces in hopes of injecting his "poison" into Imperial lands! His next stop: the Empier vassal of Printemps, where he hopes to knock Balt-Rhein's legs out from under them!

Read the album
Add to cart
Added to your cart
V.24 - Altair: A Record of Battles
(0)
$10.99
As Zaganos sadistically toys with the Balt-Rhein capital of St. Michael, Lady Lelederik leverages her brilliant leadership skills to storm Altun, the capital of Torqye! Both sides have their hands clasped around each other's throats in this epic climax...and when it all comes to an end, what will happen to Tughril Mahmut Pasha after he stakes his life to defend Altun?!