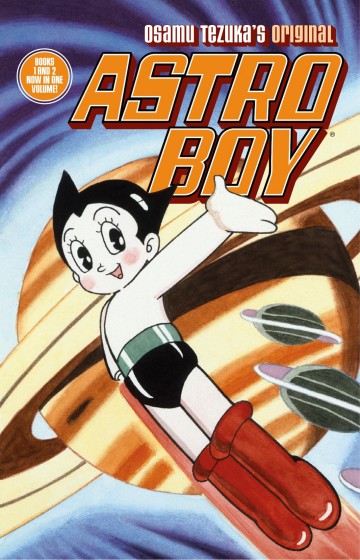 Perfect introduction to Astro Boy. First, it’s two volumes for the price of one. Second, the presentation at the beginning of the book tells all you need to know about Osamu Tezuka, Astro Boy’s creator, and his times. Third, you get Astro Boy’s origin story, reworked by Tezuka in 1975, not just to accommodate to modern sensibilities, but also to show just how much his craftsmanship has improved since Astro Boy first appeared in print, in 1951. Tezuka himself appears in these volumes, commenting on various social and cultural issues that influenced his work. Fourth, the stories here are very different, you’ll definitely find at least one to your liking. My favorite is “The Third Magician”, where a magic show is just the starting point for a huge adventure. All the stories share the same theme (“civil rights for robots!”) but they’re nonetheless children's stories, so action, fun & laughs are still the main focus.

Dark Horse proudly presents one of the crown jewels of manga--Astro Boy! Created by the late Osamu Tezuka, a revered animator and cartoonist (who created over 150,000 pages of comics in his career!) considered the Walt Disney of Japan, Astro Boy was the first manga series to be adapted to animation and became a worldwide phenomenon, making Astro Boy the Mickey Mouse of anime-a jet-powered, super- strong, evil-robot-bashing, alien-invasion-smashing Mickey Mouse, that is! Exciting, whimsical, and touching, Astro Boy hearkens back to the classic era of comics and animation, featuring stories that readers young and old will enjoy. * This special edition combines the first two volumes of the collected Astro Boy, in one value-priced collection!

Astro Boy- Volume 1 - Astro Boy 1 & 2 - Osamu Tezuka - to read online on izneo or download on your iOS and Android tablet or smartphone.