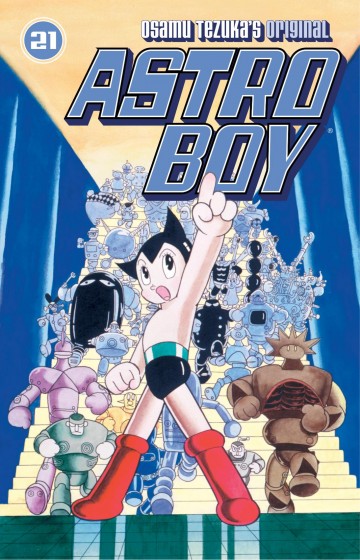 Dark Horse Comics brings the original Astro Boy to America for the first time in an English-language edition! In the wake of widespread critical acclaim for the Metropolis animated feature, interest in the work of master storyteller and cartoonist Osamu Tezuka, creator of Metropolis and the godfather of Japanese comics and animation, has never been greater, and Astro Boy is Tezuka's most beloved body of work, a visionary series that laid the groundwork for the international phenomenon that are the comics and animation industries of Japan. Innovative, exciting, and as fresh today as when it first appeared nearly half a century ago, Astro boy is timeless graphic fiction for readers of all ages. Translation by Frederik L. Schodt, author of America and the Four Japans and translator of Masamune Shirow's Orion.

This digital comic is available in english version. The following reading modes are available with the izneo reader:
Astro Boy- Volume 21 - Astro Boy Volume 21 - Osamu Tezuka - to read online on izneo or download on your iOS and Android tablet or smartphone.

Astro Boy- Volume 21 - Astro Boy Volume 21 - Osamu Tezuka - to read online on izneo or download on your iOS and Android tablet or smartphone.