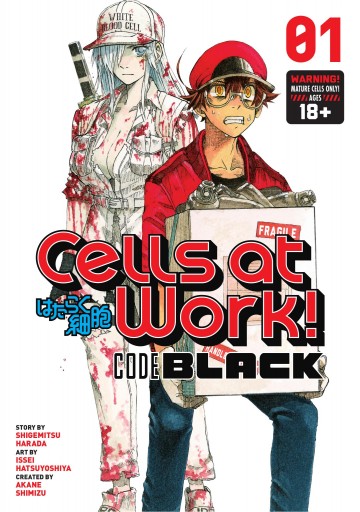 Today is RBC’s first day at work. So far, he learned his way through his huge maze of a town, reached his destination, delivered his load, got showered with invectives by the angry recipient, got stuck in a traffic jam, fought some guys that illegally dumped garbage in the middle of the street, helped patch holes in the same street, barely escaped a poison gas attack, survived a zombie invasion, dodged a huge alien-looking monster trying to skewer him, and fell in love with the white haired beauty that killed the monster and saved his life. All that before the lunch break even started. So far, typical shonen fare, right? WRONG. Because RBC is a Red Blood Cell - and he’s just one of the billion employees that work in the humongous metropolis of a human body! “Cells at Work! CODE BLACK” is an educational manga (oh no) for adults (OH NO) that paints the picture of a deteriorating body whose owner spends too much time smoking, drinking, and… having unprotected sex. The basic structure is the same in all chapters: event (i.e. drinking) > effect (i.e. euphoria, intoxication) > serious warning (i.e. fatty liver disease) > temporary victory (i.e. hepatocytes break down alcohol into carbon dioxide and water). Even if the story is dramatic, as the human gets sicker and sicker and the poor protagonists have to tackle one crisis after another, it’s still got relaxed, funny moments that make the tear jerking sequences even more impactful. The educational side of this manga is mostly optional, but I really enjoyed reading all the small-font explanations - some of them even have practical applications. Overall, a great first volume that felt weird at the beginning, but quickly became interesting, tense, even scary, and once I finally got to care about RBC and YBC and their colleagues, I got hooked. Unfortunately, even reading too much manga has negative effects on the body, so I’ll take a break… and return for volume 2 tomorrow!

THE CONTENT OF ADULTS There are trillions of cells in the human body, and they all have to work hard to keep that body alive. But what if that body isn’t taking great care of itself? What if that body smokes too much? Or drinks too much? What if that body forgets to use protection? Why, it might find itself with all manner of dysfunction, and who’s going to have to pick up the pieces? It turns out the same immune cells that fight off the common cold also have to deal with troubles of a distinctly more adult nature…

Read the album
Add to cart
Added to your cart
V.7 - Cells at Work! CODE BLACK
(1)
$10.99
After years of struggle against the ill health of this body and the despair in its heart, the ﬁrst glimmers of hope have begun to appear. Could the body ﬁnally be taking control of its health and looking to the future? Alas, even amid this turnaround, the costs of the life the body has led are still coming due. In a hidden corner, a copying error occurs, then repeats itself, then repeats itself again. A new, unnoticed threat is getting out of control: Cancer.