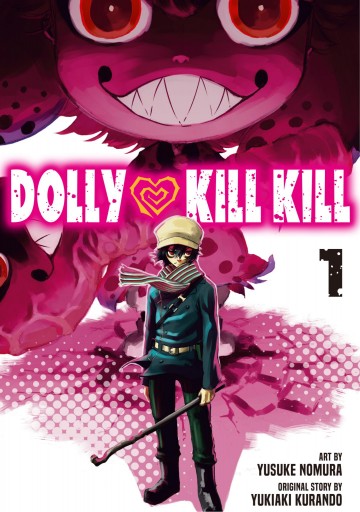 Artist YÛSUKE NOMURA and author YUKIAKI KURANDO bring you their first manga from Kodansha Comics, “Dolly Kill Kill.” This is a sci-fi/horror genre manga that is a fresh take on the alien invasion stories where the aliens aren’t the giant lizards, tentacle monsters, bug hybrids and whatnots. They are giant dolls and plushies. With human sucking vacuums and other weapons to eradicate humanity and take over Earth. NOMURA’S artwork is really good in this manga. It has less of the traditional types that you would normally see and has a younger feel to it. Lines are crisp, characters are drawn well, and you really get a feeling of emotion from the artwork. KURANDO’S story is so unique. Movies like “Annabelle”, “Childs Play”,and “Saw” show that dolls can be used to scare people, but this is a first I have seen them being used to take over the world. I love the premise, and I can’t wait to read more of it in the future. The characterization of Ikumi, the lead protagonist, shows the lengths he would go to destroy the “Dollies” once and for all. I am curious to see how many volumes are brought out to American audiences. I with such a unique idea and spectacular artwork, I hope to see more in the future. I highly recommend “Dolly Kill Kill” for those people looking for a fresh alien apocalypse story.