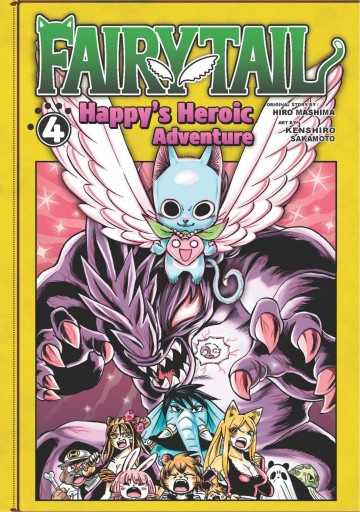 Happy and his friends thought the showdown between Animal Village and Wild Town would be over when the villagers won a series of duels, but Rhino refused to accept defeat and seized the Ether Moon, going on a rampage! With the super strength it gave him, it looks like he's going to destroy both the village and the town! Will Happy, Chee, and the others be able to stop him?! The thrilling conclusion of the Wild Town arc! Plus the Cool Land arc, where Happy, Luna, and Agi go to a frozen island to fight a monster! This volume concludes Part 1 of Happy's new world adventure!

Read the album
Add to cart
Added to your cart
V.8 - Fairy Tail: Happy's Heroic Adventure
(0)
$10.99
Marice and the MF (Marice Friends) she created with her magic were used as an energy source in the past by General Star. In her sorrow, she lost control of her magic, so they had to seal her away for a thousand years. After her revival, she was able to enjoy the peaceful paradise she always dreamed of with Happy and the MF. But then General Star traveled through space-time to capture her! Will Happy be able to save Marice and the MF?! Will he ever be able to go back home to Natsu?! Happy's Heroic Adventure in another world is finally reaching its conclusion!