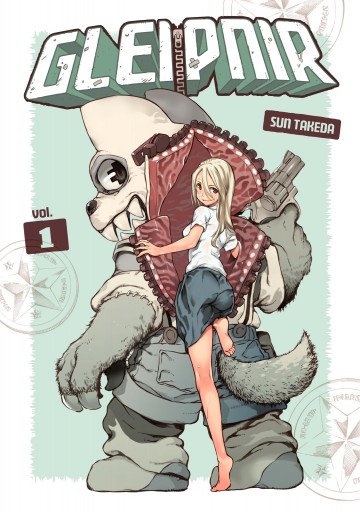 Gleipnir Vol. 1 by Sun Takeda and publisher Kondasha Comics was an interesting manga for me to read. Part horror, part borderline adult sexual themes, Gleipnir is the story of Shuichi Kagaya, a seemingly “normal“ high school student harboring a dark secret—he can turn into a large semi-dog toy packing a giant revolver. He saves Claire, a beautiful girl at the same high school who also has a dark secret that shares with Shuichi’s. The plot is another of these horror genre stories that deals with toy monsters as either the protagonist or the antagonist. Takeda breathes the struggle that Shuichi faces being this monster and being forced to do things he doesn’t want to by Claire because he doesn’t want anyone to know. And Claire is the perfect “puppet master” continually pulling the strings of Shuichi. Definitely an interesting story in the series so far, and I have heard that the anime is worth checking out as well. I am getting into this type of genre with “Dolly Kill Kill” and “Gleipnir.” I hope to read more of the latter as the story was just getting interesting. Definitely check it out if you like the obscure type of horror. The art is spot on and the story flows well. I highly recommend “Gleipnir.”

Gleipnir, vol 1 is written and drawn by Sun Takeda. It's about a boy who has the ability to turn into a monster. He rescues a girl from a fire, and together they set out to explore his strange abilities. I enjoyed this book, it has an interesting premise. Like most manga, it's fast paced and there's many revelations along the way. I also enjoyed the relationship between the two main characters. They're an odd match, but that's what makes it interesting. There's still a lot to find out about the story though, I would have liked a few more answers before the end of this volume. That would have set up the next volume in a nice way, with the reader having a bit more clues as to what's going on. The artwork was fine. I guess it doesn't really stand out that much from other manga, but I would definitely say it's above average at least. It really has an ominous feel that fits the story. Gleipnir, vol 1 gives a promising start to this series, with a creator who knows how to create entertainment as well as suspense.

A dark and sexy body-horror action manga perfect for fans of Prison School and High School of the Dead! Shuichi Kagaya is an ordinary high school kid in a boring little town. But when a beautiful classmate is caught in a warehouse fire, he discovers a mysterious power: he can transform into a furry dog with an oversized revolver and a zipper down his back. He saves the girl’s life, sharing his secret with her. But she’s searching for the sister who killed her family, and she doesn’t care how degrading it gets: she will use Shuichi to accomplish her mission …

Read the album
Pre-order
Added to your cart
V.10 - Gleipnir
(0)
$10.99
ALL OR NOTHING Desperate to revive Honoka after a terrible mistake, Kaito sought power over life and death. What he managed to bring back was not the same gentle-hearted girl who died, however, but a hollow, monstrous thing bent on slowly erasing the world. Having finally recovered his lost memories, Shuichi now understands his place in everything—and how he must stop Kaito at any cost. But to do so, he and Claire will have to achieve something they thought impossible...

Read Isekai!
All about fantasy...