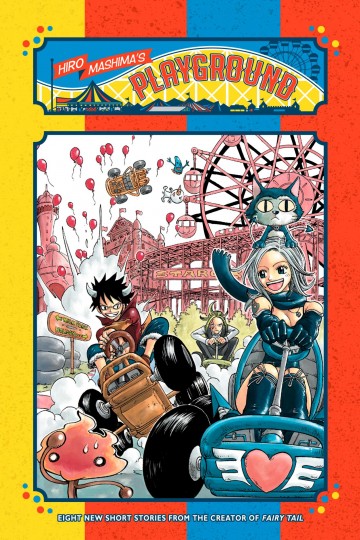 Hop in for an amazing tour of Hiro Mashima’s imagination–with eight exciting rides to choose from! You can read the story that birthed Fairy Tail, go on a fun journey with Plue, and meet all-new friends and foes! * MAGICIAN: In order to save the Magician’s Club at his school, Aoi, the club president, must put his small-time illusions aside and rescue the principal’s dog! But when a mysterious group appears, Aoi taps into his true magical powers! * FAIRY TALE: A national treasure’s been stolen and the magical world of faeries is in an uproar! The Fire Prince Silva may not get along with the Water girl, El, but they’ll have to overcome their differences to confront an evil witch! * COCONA: Taking her pet cat along for the journey, Cocona’s about to give up being the Princess of Devils for one shot at love…with a human! * PLUE’S ADVENTURE II: Plue’s beloved candy has gone missing! (To Plue, it’s a big deal.) Choose your path to solve this mystery! * BAD BOY’S SONG: With high school graduation only three months away, four best friends reflect on their boring school life and vow to leave an awesome legacy behind! * MP: Elena is learning magic, and needs one very special book to become a pro. Too bad she’s not the only one after it, and her clumsy buddy Bomb isn’t much help! * XMAS HEARTS: Santa Strat is a Christmas hater, and he plans to skip the holidays and feast on cake yet again. Or he did…until someone stole all the cakes! Now he’s looking for payback! * COMBO SQUAD: Despite his job as a hero, Mafuyu Mitsurugi is more of a zero. In a last ditch effort, his boss teams him up with a beautiful girl and a surly brute. And they just might save the day!

Read the album
Add to cart
Added to your cart
V.6 - EDENS ZERO
(0)
$10.99
A young boy gazes up at the sky and sees a streaming bolt of light. The friendly, armor-clad being at his side tells him gently, “That’s a dragon.” The fact that he’s joking isn’t important. What’s important is the look of wonder on the boy’s face… and the galaxy- spanning adventure that’s about to take place! Join Hiro Mashima (Fairy Tail, Rave Master) once more as he takes to the stars for another thrilling saga!