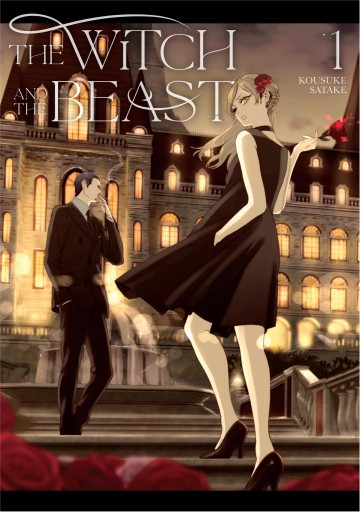 Ashaf is a quiet man that talks to black crows and carries a coffin on his back. Guideau is a noisy girl with fangs that carries a grudge on her neck - a witch’s curse. Together, they’re part of the Order of Magical Resonance - a group that works by magic, for magic, and of magic. In other words, they’re supernatural detectives whose cases tend to revolve around witches. It’s only natural, because the only reason Guideau joined the Order was to find the witch that cursed her - and have her curse removed. But what is her curse, anyway? “The Witch and the Beast” is a violent, bloody and spectacular fantasy gothic detective series set in a steampunk-ish world where humans are nothing but prey. How about witches, then? Well, this first volume is interesting but confusing, witches are very one-note, and our duo escapes too easily from any trouble they encounter. The concept is cool, the art is amazing, but the story is somewhat lacking and I didn't care about the two main characters - Ashaf is always haughty and unreadable, Guideau is always raging... it gets boring. Hopefully the writing will get stronger in the next volume.

Ashaf: a soft-spoken man with delicate features, a coffin strapped to his back, and an entourage of black crows. Guideau: a feral, violent girl with long fangs and the eyes of a beast. This ominous pair appear one day in a town in thrall to a witch — a ruler with magic coursing through her tattooed body, who has convinced the townsfolk she’s their hero. But Ashaf and Guideau know better. They live by one creed: “Wherever a witch goes, only curses and disasters follow.” They have scores to settle, and they won’t hesitate to remove anyone in their way, be it angry mob or army garrison. A dark fairytale set in a steampunk world of magic and monsters, The Witch and the Beast will entice and entrap manga readers looking for their next fantasy action fix!

Read the album
Add to cart
Added to your cart
V.6 - The Witch and the Beast
(0)
$10.99
In pursuit of Angela, Guideau and Ashaf venture into the Fall—an immeasurably deep chasm that acts as a portal to other worlds, including the land of vampires, Orlencia Sett. As outsiders, the pair must rely on two envoys from the Order to navigate this unfamiliar territory. However, Guideau and Ashaf soon find themselves ensnared in a self-serving plot orchestrated by one of their companions, a plot that could upset the status quo of the vampire underworld…

Read the album
Add to cart
Added to your cart
V.1 - The Witch and the Beast
(2)
$10.99
Special selection!
Action, Adventure and Battles!