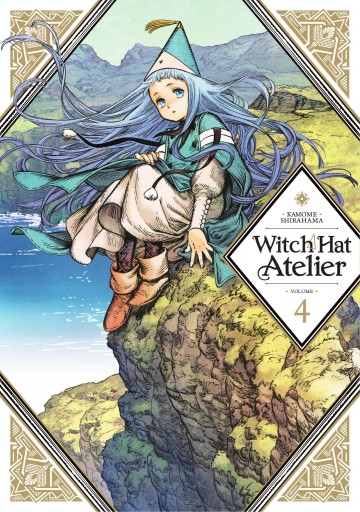 It's mating season for the scale wolves - they bump into each other to shed their dangerous scales, to protect their newborns from injury, and Agott reveals quite a lot about herself with the simple line “If they didn’t feel the need to form pairs, they could keep their armor on at all times.” The same goes for Richen, who reluctantly lets Coco into her hideout, but says “I’m only interested in my own spells. I don’t need anyone else’s magic. I refuse to let mine be tainted.” Obviously, the two young apprentice witches will have to learn how to get a little out of their shells - because “The Sincerity of the Shield”, the second magic test, is finally here. Agott and Richen will take it alongside Euini, master Kukrow’s apprentice, a shy and dispirited kid that already failed the test twice. As usual, teamwork is essential - will our three loners succeed? (censored) Are scale wolves essential to the story? (Not exactly, but they’re very cool.) Are there evil witches around this time? (censored) Wait, where’s Coco? (Don’t worry, she’s fine. You don’t expect to see Coco in the spotlight all the time, are you?) This volume can feel a little slower than the previous ones, because it focuses more on the lore of the Witch Hat Universe, and we get to meet some very interesting creatures, explore some amazing ruins, and see some of the best and the worst that magic can do. Still, it’s a very good even if less complex storyline, that allows Shirahama to prove that on top of being an amazing portraitist and landscape artist, she’s amazing at action scenes, as well. Full speed ahead to volume 5!

"TWISTED PATHS Can Coco and her friends pass their most harrowing test yet? Or will the nefarious Brimmed Caps end their journey towards witch-hood?! Now that Coco has been fully accepted into Qifrey’s Atelier, it’s time for her and her colleagues to move onto the next test: The Sincerity of the Shield. Passing the test involves escorting some feathery friends to their nesting grounds, which sounds simple enough, except that the path before the young witches is a winding road filled with ancient magical traps! The test must also be completed in a group, and there’s one witch-in-training from outside of Qifrey’s atelier who doesn’t seem to have the confidence to make the cut. To top it all off, a Brimmed Cap lurks in the shadows, waiting to attack…"

Read the album
Add to cart
Added to your cart
V.8 - Witch Hat Atelier
(1)
$10.99
After ﬁnding success together in their second trials, Coco and her friends return to the warmth of the atelier. Before long, they are approached by Tartah from Kalhn, and he needs their help setting up shop at the thrilling witches’ festival, Silver Eve! But to design a contraption to sell there, the young students must consider the power of magic—at once delightful, beneﬁcial, and potentially harmful. As Coco makes preparations alongside Tartah, she’s reunited with Custas, a boy who was saved by Coco once before, but is convinced that luck will never shine on him again…