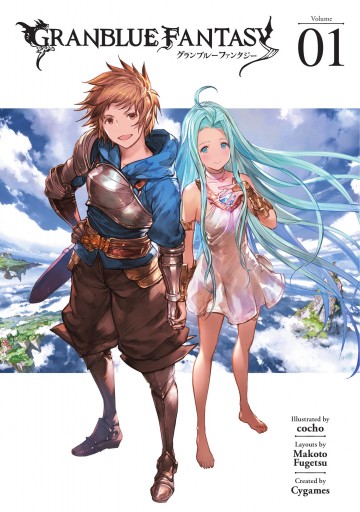 The manga based on the acclaimed RPG, from the designers of gaming classics Final Fantasy V/VI/IX. Don’t wait for Granblue Fantasy: Relink to return to the world of Granblue! Ever since his father left home, Gran has longed to search for Estalucia, the mystical island in the sky. Gran’s adventure begins when he runs into Lyria, a mysterious girl being chased by the Imperial Army. Even though Gran perishes trying to save her, she uses her powers to resurrect him, and this incredible act binds their fates together! Now, Gran and his pal, Vyrn, must fight to protect Lyria…and to find their way to the end of the sky!

This digital comic is available in english version. The following reading modes are available with the izneo reader:
Granblue Fantasy- Volume 1 - Granblue Fantasy 1 - Cygames - to read online on izneo or download on your iOS and Android tablet or smartphone.

Read the album
Add to cart
Added to your cart
V.7 - Granblue Fantasy
(0)
$10.99 $5.99
What began as a duel between Katalina and Vira erupts into a battle threatening the entire Citadel, thanks to the Empire’s meddling. After the dust settles, the Grandcypher’s weary condition gets Gran and crew stranded on an island enshrouded in mist—the Ship Graveyard! As they set out to solve the mystery binding their freedom, an unlikely duo lends a hand in coaxing out the keeper of the island’s secrets. Join the crew for one last adventure in the final volume of this sword-clashing, heartwarming series!