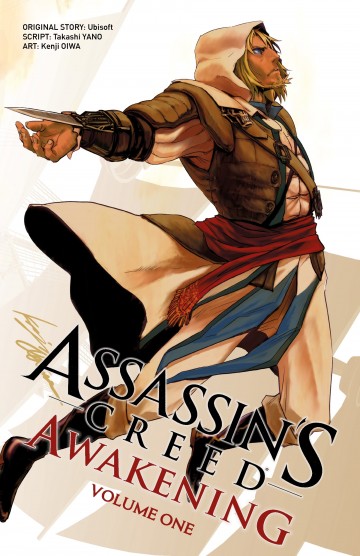 Action-packed, intense and dangerous adventures on the high seas… It’s 1715, and Edward Kenway is a tough pirate in the Caribbean. A chance encounter with a mysterious figure sends him on a dangerous and action-packed mission involving Assassins and Templars… This manga loosely adapts the Assassin’s Creed IV: Black Flag video game, adding new elements to the tale. Collects Assassin’s Creed: Awakening #1-6 “Kenway has never looked so good as he does in shonen manga!” – Yelling About Comics

Read the album
Add to cart
Added to your cart
V.2 - Assassin's Creed: Awakening
(0)
$13.99
“Awakening is absolutely amazing… 9 out of 10.” – Comics: The Gathering An exciting, epic tale from the world of Assassin’s Creed! It’s 1715, and pirate Edward Kenway is caught in a deadly war between the Assassin’s and the Templars… This manga loosely adapts the Assassin’s Creed IV: Black Flag video game, adding exciting new elements to the tale. Collected for the first time in English.

Read the album
Add to cart
Added to your cart
V.1 - C.6 - Assassin's Creed: Awakening
(0)
$4.99
It's the final part of volume one of Assassin's Creed Awakening, the story based on the Assassin's Creed Black Flag game. In the present day, Masato learns more about Abstergo Industries and deals with some unexpected injuries. In the 18th Century, Edward Kenway meets the mysterious Ah Tabai and receives a deadly offer...

Read the album
Add to cart
Added to your cart
V.1 - C.1 - Assassin's Creed: Awakening
(0)
$4.99
Become a super reader
Write reviews and get comics for free!