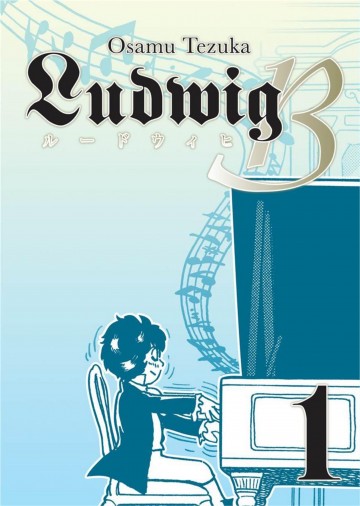 “Ludwig B.” is Osamu Tezuka’s final (and unfortunately unfinished…) work. It’s a fictional biography of Ludwig van Beethoven - but if you can indeed read it to learn a few things about the famous German composer, this is not its primary goal. Instead, Tezuka takes a lot of liberties and adapts Beethoven’s life to suit the needs of the story; a story of genius versus evil, and of the way humans let their upbringing define them forever - or fight and change themselves. Beethoven’s arch nemesis, Franz Kreuzstein, is just as distorted by his proud, impetuous and abusive father as Beethoven was by his alcoholic father. Go past the ridiculous premise (Kreuzstein’s “origin” story is pure Japanese craziness, and at the end he swore to destroy all people called “Ludwig”...) and have fun reading this melodrama about the healing power of music. Art-wise, this is one of the most daring and experimental of Tezuka’s works, with striking images galore (who knew watching Beethoven play piano can be as fun as reading a fighting manga?). The first volume ends when Beethoven is about 18, with a dramatic invention of his first meeting with Joseph Haydn (who in reality would become his teacher a little earlier); I’m guessing the second volume will probably follow Beethoven’s first real victories (his first symphonies). So far, a cool read, and way more interesting than I thought it’ll be.

The cry of war comes soon from France, while a young boy destined for greatness simply cries in pain from a fateful strike to his head in Bonn, Germany. Ludwig van Beethoven will grow to become one of the most influential composers in a few short years, but in his early days, he was just a commoner trying to survive his days with an alcoholic father and a world that just hasn't discovered his greatness yet. In this age, he wasn't an influential composer: he was a young man simply named "Ludwig," which inspires hatred and fear from a certain nobleman, Franz Kreuzstein. Why does Franz have it out for all named "Ludwig," and can Beethoven survive this personal war he's deaf to? Nearly 400 Kickstarter pledges and 200 years after his death, Ludwig van Beethoven remains an incredibly-influential figure worldwide, and fans made their voice heard: they wanted to see one of the final, unfinished works of a legend on par with Beethoven himself. Osamu Tezuka (Astro Boy, Kimba The White Lion, Black Jack, Buddha) died before he could finished his biographical tale of the musical legend which adds a signature Tezuka flair, humor, and pathos to the tale of one the world's most pained and disparaged musicians of the 18th century. Witness the world that Beethoven came from and the conflicts he fought in a way that only the "God of Manga" can depict.

Continue summary
Ludwig B- Volume 1 - Ludwig B vol.1 - Osamu Tezuka - to read online on izneo or download on your iOS and Android tablet or smartphone.

Read the album
Add to cart
Added to your cart
V.2 - Ludwig B
(1)
$7.99
Ludwig van Beethoven is rising in the charts; gaining some praise and attention from those he'd seek to learn from (for better or worse), Beethoven's life strives in the face of the war in France, despite his debilitating deafness making itself all-too-apparent. Escaping from Bonn to live his life, Beethoven fights a war for recognition and support, while his unknown nemesis, Franz Kreuzstein, fights the literal War of the First Coalition. While Beethoven is a lover of the craft of music making, he's not a fighter, but Franz might give him a battle when the war is over. Will Beethoven be able to hear the music he plays, or is he cursed to only imagine what joy he'll bring to the world for centuries to come? One of the final works of the "God of Manga", Osamu Tezuka, is collected in the second volume of LUDWIG B., the first English-language translation of the manga biography of Ludwig van Beethoven brought to readers thanks to a successful Kickstarter campaign. Nearly 400 fans demanded that, while unfinished, Tezuka's work should be brought to English audiences, more than a quarter of a century after his death. Much like the compositions by the great Beethoven himself, LUDWIG B. will make you laugh, cry, and lament the loss of one of the world's greats.

Ludwig B- Volume 1 - Ludwig B vol.1 - Osamu Tezuka - to read online on izneo or download on your iOS and Android tablet or smartphone.
New

Read the album
Add to cart
Added to your cart
Clockwork Apple
(0)
$9.99
Osamu Tezuka unleashes several creepy suspenseful short stories in this anthology of speculative fiction spanning the years of 1968 thru 1973. When a Nazi lieutenant is sentenced to death for war crimes, he expects to escape with his life, but hubris is his downfall. A female android marries for love but is soon lost, and she must deal with the consequences. After a married man finds out his city is being experimented on, he tries to save the people while struggling with adulterous thoughts. On a dark and lonely road, a cabby picks up a shady man who threatens him, but little does his passenger know the cabby is not as he seems. An educated man falls in love with an elusive woman who has a life altering secret. American school kids learn the cruelty of war. A revolutionary fails his revolution, and an interstellar peace conference does not yield the hoped for results when space hippies defy peace conventions. These eerie stories will leave one wandering the depths of despair and hope against all odds.
New

Read the album
Add to cart
Added to your cart
The Euphrates Tree
(0)
$9.99

Read the album
Add to cart
Added to your cart
The Thief Inoue Akikazu
(0)
$7.99