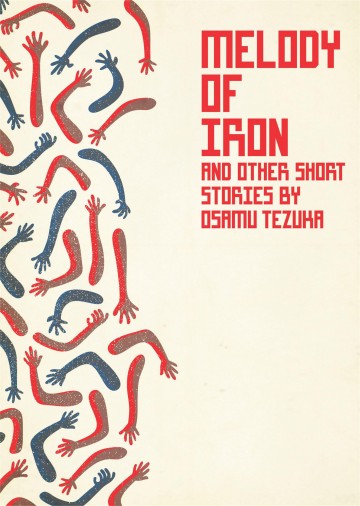 Three short stories with thriller/horror themes, that'll shock you with their jarring but very effective contrast between the usual Tezuka art (smooth lines, round curves. cleanly drawn heroes, big, scintillating manga eyes...) and the darker-than-usual storylines. “Melody of Iron” is about a Japanese man whose sister unknowingly marries an American mobster. After witnessing a murder and speaking out against the murderer, the Japanese is cruelly punished by the mafia. Can a man without arms get his revenge against the mob? Oh yeah, he sure can. “The White Shadow” is about the way a tragedy can leave an indelible mark on the survivor - and yet, it has a soothing / weird happy end. Finally, “Revolution” is about a man whose wife has an accident, then she becomes a different person - she has different memories, doesn’t remember anything about their life together, but instead remembers vividly her (fake?) life before meeting her husband. You’ll enjoy this one better if you know at least a little about Buddhism and Shintoism. Overall, this is an excellent example of Tezuka’s craftsmanship - he is a master at slowly building up suspense with his storytelling and then suddenly speeding up the action via his extremely dynamic lines and smart use of the black / white contrast. He’s even apologizing in the postscript for what he feels are “manga written during times I was mentally hungry (...) that lacks in dreams and overall fun” - well, don’t be, mr. Tezuka. Not all stories have to be fun (yet, “Melody of Iron” kind of is). Sometimes we need to remember the world is a cruel place and all we can do is strive to survive - and maybe prosper.

When Dan Takuya’s sister marries into the mob, he is also automatically thrown into the dark underworld of organized crime. While unknowingly breaking the mob’s code of silence, Dan is brutally tortured, arms severed and left for dead as punishment. He somehow manages to survive, and through rehab and with the help of an eccentric doctor, he is provided with new prosthetic metal arms. But there is a catch! He must tap into his psychic powers to move his new limbs. Through the use of telekinesis, or KP, he trains to make use of his new arms through sheer will and vows revenge to those who did him wrong. But as soon as he’s out for the hunt, there is a wake of death that’s left behind which he has no knowledge of. Does Dan truly have full control of his new metal weapons?

Continue summary
Our Feel Good Reading List
Comics, Manga & Graphic Novel that will cheer you up :)

Melody of Iron- Volume 1 - Melody of Iron - Osamu Tezuka - to read online on izneo or download on your iOS and Android tablet or smartphone.
New

Read the album
Add to cart
Added to your cart
Atomcat
(0)
$14.99
Reading the “Tetsuwan Atom” (popularized in America as “Astro Boy”) comic book with his dad is Tsugio’s one refuge from merciless school bullies. And even then, without a single friend, Tsugio can’t catch a break. One day he finds an abandoned kitten, and names it after the robot hero to convince his family to keep it. But after a strange encounter with aliens honeymooning on Earth, Tsugio’s shocked to find his cat can speak – and has all of Astro Boy’s powers! Sworn to secrecy, Tsugio and Earth’s tiniest hero find themselves entangled with demonic cats, pirate ghosts, a crime syndicate, and more! Playful, ingenious and appropriate for all ages, Osamu Tezuka’s fresh take on his classic Astro Boy character will charm nostalgic grown- ups and clever kids. As gentle and humane as it is exciting, Atomcat also nurtures a positive outlook for children who might feel like they don’t quite fit in.
New

Read the album
Add to cart
Added to your cart
Record of the Glass Castle
(0)
$11.99
New

Read the album
Add to cart
Added to your cart
Crime and Punishment
(0)
$9.49
New