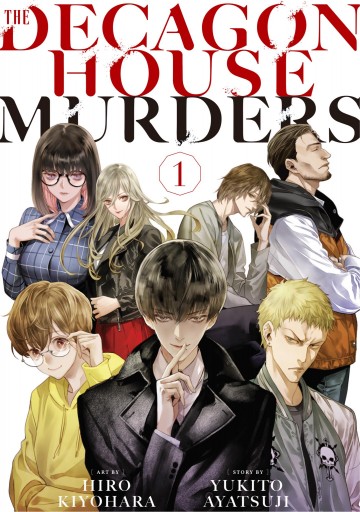 The Mystery Novel Research Association has a weird tradition - its members are nicknamed after famous mystery writers of the past (although, to be honest, I had to google “Orczy” and “Van” - simply because they were famous… a century ago, in the 1920s). Also, it’s not just any old reading club - they’re having fishing trips (one of which ended up with a capsized boat and a drowned girl), and camping trips, like staying a whole week on an uninhabited island where a mass murder happened six months ago. Needless to say, each of the seven members of the club has their quirks, but they all have something in common - they love mystery books and could be true competitors for any real detective. “The Decagon House Murders” is based on a Japanese mystery novel written in 1987; it borrows the premise and structure from Agatha Christie’s “And Then There Were None” and it’s indeed a very carefully plotted book. For me, the most interesting part was not the closed island mystery, but the fact that not all of the possible victims and culprits are actually on the island. I’m not spoiling much, because as early as page 53 we meet the missing Mystery Club members: Doyle and Morisu (Morisu being the japanization of Maurice Leblanc, obviously) as well as a mysterious man with a villain figure that might or might not be central to the island’s grisly murders. This first volume does a great job at introducing the characters and the mystery. Is someone actually trying to kill all the Mystery Club members? Well, you’ll have to read to find out. At this time (mid-august) the series has three volumes in Japan, and the fourth will probably be the last. The second English language volume will be published next month, and hopefully Kodansha will keep up the pace. I’m really looking forward to reading the whole series - the plot is smart, the writing is snappy, and the art is great. If you enjoy detective novels, this is a must-read.

The manga based off the best-selling The Decagon House Murders novel by Yukito Ayatsuji! The members of a particular university's Mystery Club travel to a ten-sided house on a remote island...which just happens to have been the scene of a gristly, and unsolved, mass murder. Armed with details of the murder and keys to the property, they set out to dig deeper...but can they trust the "facts" of the case? And moreover...can they trust each other?

Read the album
Add to cart
Added to your cart
V.3 - The Decagon House Murders
(1)
$10.99 $5.99
After the Mystery Club arrives on Tsunojima Island, they discover mysterious tablets with things like "Detective" and "Murderer" written on them. They initially see it as a tasteless prank, but when the roles written on the tablets start to come true, and the victims begin to pile up, the group realizes their lives will depend on finding the killer... Meanwhile, on the mainland, Kawaminami and Shimada are chasing after the truth behind the "mysterious quadruple homicide"...