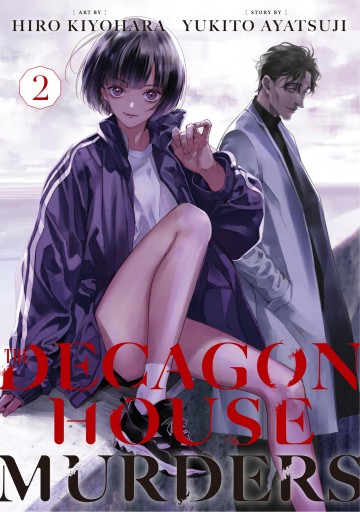 At least one of the Mystery Novel Research Association members has come on the island with a very clear (and rather secret) plan. It’s Orczy, who came to mourn the dead - Chiori Nakamura, who died when their boat drowned during last summer’s trip, was the daughter of the island’s owner, although she lived on the mainland with her grandfather. “I’m sorry! Forgive me, Chiori… We did something horrible…” says Orczy - before yet another horrible event happens and the “murderer and detectives” game starts in earnest. There are clear connections between the current events and the mass murder that happened six months ago - but without any way to contact the mainland and call the police, the six remaining amateur sleuths are forced into action. Is there really a killer between them? Or is there an invisible threat on the island? What’s the connection between the parallel investigations of Doyle and Morisu on the mainland and their friends on Tsunojima island? Is it weird to laugh at the funny strips at the end of the book, especially as they involve dead characters? This volume was a blast - beautiful art, scary story, smart detective work; I can’t wait to find out the culprit, although I’m quite sure next month’s volume won’t reveal it.

The manga based off the best-selling The Decagon House Murders novel by Yukito Ayatsuji! The members of a particular university's Mystery Club travel to a ten-sided house on a remote island...which just happens to have been the scene of a gristly, and unsolved, mass murder. Armed with details of the murder and keys to the property, they set out to dig deeper...but can they trust the "facts" of the case? And moreover...can they trust each other? After arriving on the island, the Mystery Club discover mysterious tablets with things like "Detective" and "Murderer" written on them. They initially see it as a tasteless prank, but later that night, the tablet reading "First Victim" ends up on somebody's door, and the group is forced into solving a real mystery... Meanwhile, on the mainland, Kawaminami and Shimada are getting closer to the secret of the island after receiving letters from Seiji Nakamura, who's supposed to be dead...!!

Read the album
Add to cart
Added to your cart
V.3 - The Decagon House Murders
(1)
$10.99
After the Mystery Club arrives on Tsunojima Island, they discover mysterious tablets with things like "Detective" and "Murderer" written on them. They initially see it as a tasteless prank, but when the roles written on the tablets start to come true, and the victims begin to pile up, the group realizes their lives will depend on finding the killer... Meanwhile, on the mainland, Kawaminami and Shimada are chasing after the truth behind the "mysterious quadruple homicide"...

Read the album
Add to cart
Added to your cart
V.1 - The Decagon House Murders
(1)
$10.99
Discover Isekai
All about fantasy...