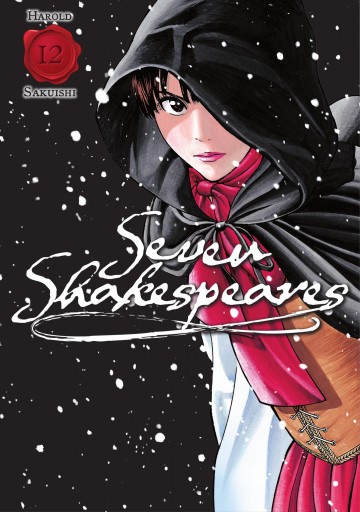 Having managed to gain an audience with Queen Elizabeth, the theater war resumes! The Admiral's Men, the number one playing company in London, have a cast of brilliant and dazzling actors, sets, and costumes, as well as Marlowe's scripts. Up against them are the Lord Strange's Men, with Shakes at the helm. In addition to his scripts, they come up with all sorts of schemes to whip audiences into a frenzy! Their trump card is his new play, the comedy Love's Labor's Lost! And during the course of its composition, Shakes and Joan grow closer... The full-scale historical epic of a nobody from the country rising up to become the greatest poet in the world! The heroes strike back in v10 of the brand-new manga from Harold Sakuishi, author of BECK and Gorillaman!

This digital comic is available in english version. The following reading modes are available with the izneo reader:
Seven Shakespeares- Volume 12 - Seven Shakespeares 12 - Harold Sakuishi - to read online on izneo or download on your iOS and Android tablet or smartphone.

Read the album
Add to cart
Added to your cart
V.16 - Seven Shakespeares
(0)
$14.99
The birth of Romeo and Juliet. This landmark romantic tragedy will build a new era for the art of theater… Queen Elizabeth’s secret. Shakes’ feelings for the woman he will never be with. And the reason he came to London… Shakespeare must come to grips with all of it in order to create Romeo and Juliet, as the various emotions of all these people living in cruel times weave together to make the greatest tales in history. A full-scale historical epic about the man who rose from nameless country bumpkin to become the greatest poet in the world! History is made in volume 12 of this all-new manga from Harold Sakuishi, author of Beck and Gorillaman!

Read the album
Add to cart
Added to your cart
V.1 - Seven Shakespeares
(0)
$14.99
Discover Isekai
All about fantasy...

Read the album
Add to cart
Added to your cart
V.2 - BECK
(0)
$10.99
As Koyuki strums and picks the guitar that Ryusuke has given him, Maho suggests that Koyuki step into the spotlight and become a singer in Ryusuke's band. And with a Battle of the Bands festival on the horizon, he finds the perfect venue in which to perform—he ends up joining a Beatles cover band that is playing in the competition. But Koyuki's nerves suddenly jump up an octave when he discovers what is really at stake in the contest. But it's probably nothing that a steamy skinny-dipping session won't cure—Maho tags along for the festival, and you can be sure that girls just want to have fun!