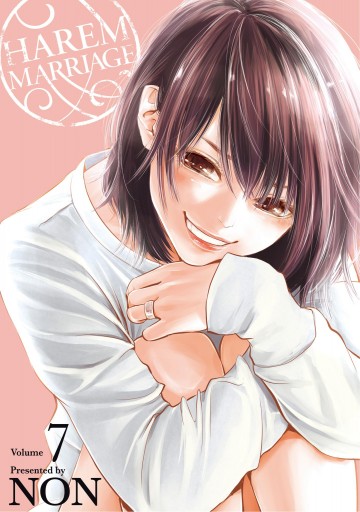 Volume 7 of the Harem Marriage series by NON had me crying tears. The Harem Marriage series is my new addiction. I applaud the mangaka for writing such an amazing story that plays with all my feelings. It balances humour and heavy subjects perfectly. Koharu's mother and father were the only two that didn't show up to her wedding with Ryunosuke, Yuzu and Madoka. In some ways, you can't blame them because Koharu has a personality where she fast loses interest in things and they want her to stop up and think for once! But Koharu has grown a lot since volume 1 and is invested in her new family now. That's why it comes as a shock when her dad gives her an ultimatum, divorce the harem or I won't see you again... It was both bittersweet and lovely to see the Date family unite to convince Koharu's dad that there is happiness in their marriage. For the first time in this series, they really felt like a family. The first half of the book had me crying tears and the sadness was so heavy that the silly end totally overwhelmed me in a good way. The wives (Yuzu and Madoka) makes plans on how to get Ryunosuke back to work and Koharu-chan is the one that has to act out the plan. Poor Koharu-chan. She's thrown out at deep waters XD I love this series. Hope it never ends.

"Does it make you happy? To know you're woman number three?" In the one city in Japan where polygamous marriage (AKA: Harem Marriage) is legal, Koharu is not only getting into the swing of her four-way marriage to Ryunosuke Date—she's relishing it, too! Stormy clouds appear on the horizon, though, when Koharu's dad inexplicably appears to revoke his blessing and orders his daughter to divorce her husband and two wives. That's when the Date family springs into action to prove to Daddy Maezono and the rest of the world that they're happy as can be in this Harem Marriage!

Read the album
Pre-order
Added to your cart
V.9 - Harem Marriage
(0)
$10.99
"I'm sorry..." After a magical night out on the town, Koharu (wife number three) finally becomes one in body and soul with her husband, Ryunosuke. Shortly after their return, Madoka (wife number two) vanishes into thin air, leaving only her wedding ring behind. While the Date family harem scrambles to find her, Ryunosuke reveals Madoka's shocking and traumatic past...
New