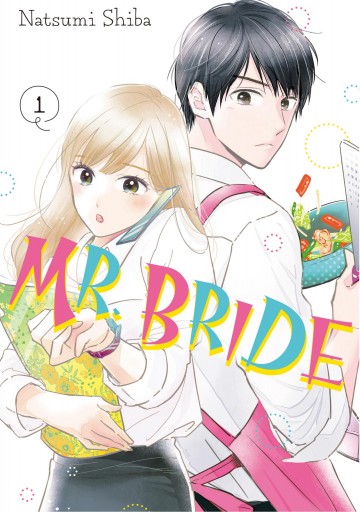 Mr. Bride Vol 1 by Natsumi Shiba shows the world as it should be – the women relaxing in front of the tv while the man is doing all the housework! LOL! But joking aside, the truth is that in the majority of homes it's the women that are taking care of the household and it's expected that it's natural for a woman to be neat, great at cooking and a pro at housework. In the story Mr. Bride it's a reverse world. Our female main character, Hayami, is admired at work for being perfect, many dream of having her as their bride, but they don't know her dark secret. She's hopeless at taking care of herself and her home is a mess! Our male main character, Yamamoto, is her kohai and one of her biggest fans - when he discovers her secret, it's a big shock! Luckily he is obsessed with cleanness and loves housework and decides to save Hayami from the mold on her walls and her unhealthy diet. I think the story is both funny and clever at the same time! Funny because the reverse world makes it to a dream world, where the top dog is the woman, and every worry and joke about a woman and a man living together are reversed. Yamamoto's big brother is worried about what Hayami's intentions towards his brother is, and is it even safe for his brother to live alone with a woman :O (that kind of joke) And it's clever storytelling because the reverse world plays with gender stereotypes in terms of what is femininity and masculinity? It's the villain in the story and a big wall between our couple in terms of beginning a romance. This is a funny clever story where the ”normal” is reverse.

Hayami is the it-woman at her job—she's cool, confident, and admired by all. But her has-it-all exterior belies a dark secret...her house is a mess, and she's no good at taking care of herself! Enter Yamamoto-kun—her colleague who thinks the world of her, and who refuses to let her slobbish behavior slide. Soon he's over at her house often enough that she asks him to move in with her! Where will this roundabout relationship take them?!

Read the album
Pre-order
Added to your cart
V.3 - Mr. Bride
(0)
$10.99
At 26 years old, Hayami is four years into her career as a saleswoman. She's an ace when it comes to her work, but at home she becomes a massive slob. It just so happens that Yamamoto-kun, her junior who carries a bit of a torch for her, is a pro at housework! Hayami takes him in as her wife, and their life as housemates begins. But why does it feel like things are slowly starting to change between them...!?
New