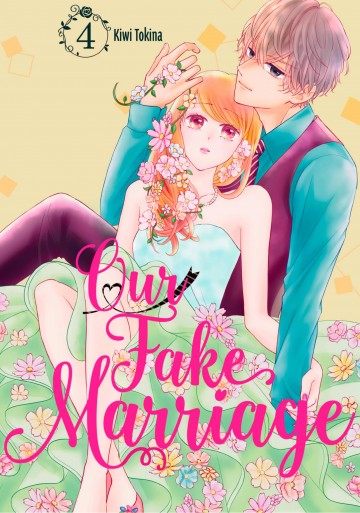 While at the mercy of the pompous Takumi, Yae’s also starting to fall for the sweet side of him. But Takumi has no desire to get married and his fake wife won’t ever become the real deal… Well, that’s what she thought when Takumi proposes to Yae, saying, “Wanna get married?”! The two finally spend the night together… Then, Ryo-san, Takumi’s sempai from when he was an office worker, appears before the two who are at their peak of happiness (or should be) and puts Yae in a real pinch!

This digital comic is available in english version. The following reading modes are available with the izneo reader:
Our Fake Marriage- Volume 4 - Our Fake Marriage 4 - Kiwi Tokina - to read online on izneo or download on your iOS and Android tablet or smartphone.
New

Read the album
Add to cart
Added to your cart
V.7 - Our Fake Marriage
(0)
$10.99
On the way home from a friend's wedding, Takumi told Yae that they should end their "sham marriage." Although she went into shock at this sudden development, after hearing the truth behind her split with Takumi from Jun-san, she chased after Takumi to the far off country of the Republic of Malta. What will be their fate when the two finally meet again…?!

Read the album
Add to cart
Added to your cart
V.1 - Our Fake Marriage
(1)
$10.99
Special selection!
Action, Adventure and Battles!

Read the album
Add to cart
Added to your cart
V.6 - Our Fake Marriage 6
(0)
$10.99
Yae and Takumi, who are enjoying a private trip in Dubai, decide to go to Adul’s home, who’s the third prince of the neighboring country and Takumi’s acquaintance. However, Adul took a liking to Yae and knew about their fake marriage, so she was separated from Takumi and was about to be forced to be his fourth wife! “Please, take me back to Takkun...” Yae’s in a chastity crisis in the foreign land of Dubai!!
Close