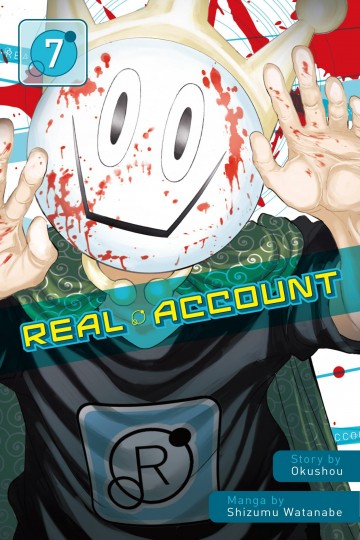 Yuma and the other players finally leave the Real Account Zone, only to encounter a new level of cruelty in the real world! Enter the sixth game of Real Account—Social-Network Tag—where a 100-million-yen bounty is placed on each player’s head. The world has now gone mad with villainous greed, and Yuma and his crew are forced to run for their lives! It’s up to the reawakened Yuma and his brilliantly strategic mind to come out on top and fight to bring down Real Account itself, but before he can accomplish his mission, a strangely familiar figure stands in his way!

This digital comic is available in english version. The following reading modes are available with the izneo reader:
Real Account- Volume 7 - Real Account 7 - Okushou, Shizumu Watanabe - to read online on izneo or download on your iOS and Android tablet or smartphone.

Read the album
Add to cart
Added to your cart
V.11 - Real Account
(0)
$19.99 $9.99
With the threat of the Derp Marbles growing stronger, Yuma’s goal to discover his true identity becomes second to another: destroy Real Account. Reunited with Chiho and Nanako, and with just 27 hours remaining in Social-Network Tag, they struggle to find out what Marble, and Real Account, have been after. Along the way, they uncover unexpected answers–like the identity of the Derp Marbles, their connection to Yuma’s family, and the true purpose of Real Account. The end of the game may be in sight, but reality can’t be wrapped up so neatly.

Read the album
Add to cart
Added to your cart
V.1 - Real Account
(0)
$10.99 $5.99
Real Account- Volume 7 - Real Account 7 - Okushou, Shizumu Watanabe - to read online on izneo or download on your iOS and Android tablet or smartphone.

Read the album
Add to cart
Added to your cart
Real Account 12 - 14
(0)
$19.99 $9.99
Yuma and Ayame are working on different teams to beat the I.D. Scorers’ Club game, and getting Real Account’s office lady pawns to give up their names will take more social cunning than they expected. After the game’s bloody conclusion, another twisted creation awaits the winders: Real Account Go. Players must catch all of Marble’s video game-inspired monsters before time runs out, and 0% phone battery means death. Despite these threats, an old friend reunites with Yuma’s group, and there may even be a romance blooming—but can a good thing ever last in the Real Account world?
Special selection!
Action, Adventure and Battles!