V.1 - Something's Wrong With Us 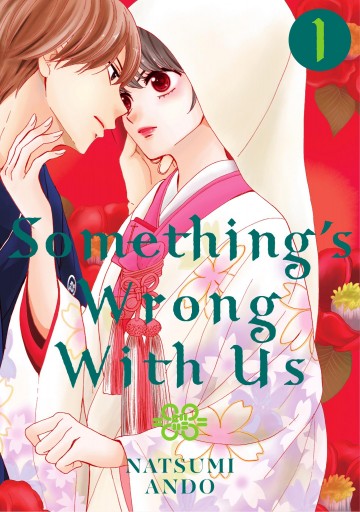 As the first album in a series that currently runs to nine volumes, Something’s Wrong With Us manages to pack a complex and expansive plot into its pages, without feeling rushed or overly dense. Natsumi Ando’s scripting and illustration have a distinctive and spacious energy that tells this tale with sparse detail and an attention to the cultural context of the sweet-making industry that provides the unlikely, but symbolically rich, background for this mixture of murder mystery and tense romanticism. Beginning with the idyllic childhood of the protagonist, Nao, which is interrupted when her mother is accused of the murder of her employer, it shifts the action to her later career as a sweet-maker. Finding herself in competition with a respected sweet-making house, she is head-hunted by her rival who also proposes to her. This unlikely combination of events is compounded by the identity of her rival: Tsubaki who is not only her childhood companion but also the son of the man that her mother was accused of killing. Of course, Tsubaki appears not to recognise her, and she is encouraged to investigate her mother’s apparent guilt, making her relationship with Tsubaki more complicated than the apparent mind-games he plays with her. It is the balance of erotic tension and suspense – Nao barely begins to articulate her intentions, and Tsubaki remains mysterious, aloof, and haughty – that lends the album its charm and intrigue. Neither entirely a romance josei manga or an action adventure, it does contain a dynamic tension between love and suspicion which promises a complicated plot as Tsubaki and Nao become more developed in the forthcoming volumes.

A spine-chilling and steamy romance between a Japanese sweets maker and the man who framed her mother for murder — Something’s Wrong With Us is the dark, psychological, sexy shojo series readers have been waiting for! Following in her mother’s footsteps, Nao became a traditional Japanese sweets maker, and at 21, she’s about to take the industry by storm. With unparalleled artistry and a bright attitude, she gets an offer to work at a world-class confectionary company. But when she meets the young, handsome owner, she recognizes his cold stare… It’s none other than Tsubaki, her childhood friend and first crush-the same boy who stood over his father’s bloodied body 15 years ago, and framed Nao’s mother for the murder. As the only witness of that fateful night, Nao is eager to chase down the truth and confirm her suspicions. Since Tsubaki has no clue who she is, she seizes her chance to get close to him, but instead of finding any answers, she begins falling deeper for Tsubaki’s allure…

Read the album
Add to cart
Added to your cart
V.6 - Something's Wrong With Us
(0)
$10.99
Nao is more nervous than ever experiencing some unfamiliar symptoms, but she throws herself into making Shimaya’s warabi mochi in order to help Jojima out. Meanwhile, Tsubaki senses that Nao is hiding something from him, but decides not to press her about it, and the two naturally grow closer. When they visit Yuko, Tsubaki lays bare his true feelings and Nao is touched by his sincerity. She thinks she can take a chance on his love, but can she?

Read the album
Add to cart
Added to your cart
V.2 - Let's Dance a Waltz
(0)
$10.99
Homely and shy, Himé is burdened by the name her mother gave her, “Princess.” Wanting nothing more than to be unnoticed and live a modest life, Himé gets a jolt of inspiration when she tries a dance class where she meets Tango. Her teacher/dance partner, Tango happens to also be her classmate at school. Unfortunately, Tango is desperate to keep his ballroom dancing a secret, believing it will ruin his cool image if anyone at school finds out. Will Tango quit teaching Himé in order to keep his secret or will he be the partner Himé believes he’s destined to be?