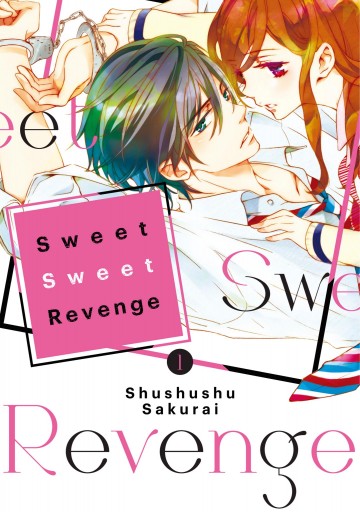 I don't think you have to be much of a revengeful sort of person to enjoy how the heroine, Hikari Minamoto, in Sweet Sweet Revenge Vol 1 by Shushushu Sakurai is taking down her bullies one by one. 5 years ago, Minamoto, was the target of five boys excessive bullying and it comes to a point where she tries to commit suicide by jumping out from the school rooftop. The boys know of the suicide attempt, but don't know if she survived or not. They didn't care to find out. She did survive and now she's back in Japan, ready to hit the boys where it hurts the most. I liked how unforgiven the heroine is in this story. The boys find out who she is pretty early on in the story, they know that she wants revenge and tries to placate her in the hope of stopping the humiliating revenge. It ranges from a single ”sorry” to trying to manipulate her into thinking of them as a friend. Just thinking about how the boys were towards Minamoto, both as kids and now as teenagers, angers me! The story is told from several POVs to tell you the story of what happened and why it happened like that. We see why the boys bullied her, and we see what consequences it had on our heroine. Bullying is a dark and heavy subject to read about, but there is something very satisfying in a read where the bullies are getting it from a revenger that are one step ahead all the time. I can't wait for the next volume.

Hikari Minamoto is here for one reason: Revenge. She's after five most popular guys in school...who have given her every reason to take them down. Never mind that they're handsome and accomplished. Will she succeed, or will even the cool-hearted queen of revenge be compromised...?!

Read the album
Pre-order
Added to your cart
V.2 - Sweet Sweet Revenge
(0)
$10.99
Hikari Minamoto has succeeded in getting revenge on four of the five men who once put her through hell. But now, she’s finding that somehow the head bully who started it all, the heir to a huge financial conglomerate, is beginning to grow on her! And now, she’s teaming up with the fifth man she was intending to get revenge on?! Playing strategy games with love, revenge, and two men… is this the start of Hikari Minamoto’s final battle?! The final volume of this thrilling, vengeful love comedy!
New

Read the album
Add to cart
Added to your cart
V.1 - Ice Eagle, Fire Hawk
(0)
$7.99
Working in the public relations department of the Imperial Capital Bank, Gojyou Takashi is very annoyed over his previous manager's sudden demotion. Gojyou believes that the real cause of the demotion is because of the newly appointed manager who was originally working in a government body. At this time, Gojyou met a pretty guy in a pub. They were attracted to each other and spent a passionate night together. The man was gone when Gojyou woke up. To his surprise, his newly appointed manager, who is from the government-parachutist-into- private-industry system, is actually the same man as the night before! The love story of a passionate public relations chief and a young elite!

Read the album
Add to cart
Added to your cart
Pleasure Invitation
(0)
$7.99