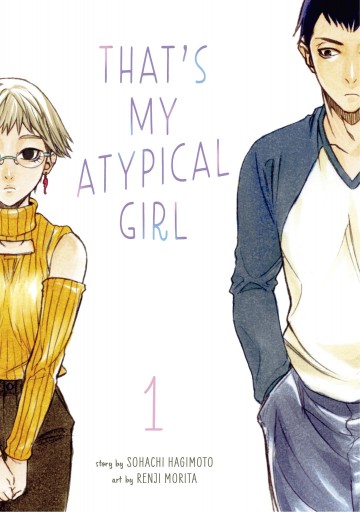 That's My Atypical Girl Vol 1 by Renji Morita is a story about mental health, self-harm and suicide. All very heavy and dark subjects and I felt that this story dealt with it respectfully. Our male MC, Yokoi, is a loner and have no connections to his parents. He barely supports himself by delivering newspapers at night and by making erotic doujinshi during the day. He also publishes his own original stories but they don't sell, so it's more a project for himself. Suddenly one day a woman, Saito, knocks on the door, asking him if he's the mangaka behind ”Opening Up”. She connected with his dark story about a victim of bullying and wants to know more about the author that understands her so well. It fast becomes apparent that Saito thinks and react differently from other people. She's strange, her reactions are unpredictable, and it's awkward. Most people would feel uncomfortable and try to get rid of her. But not Yokoi. He sees the new cutting scars on her wrist and listens to her stories. Despite how he has his own problems, he opens up his home to Saito and gives her a place to stay. It made me like him very much. This story is not happy, nor is it sad. I loved how the story doesn't portray the characters as misunderstood creatures, nor sugarcoat their situations. Saito especially is a mess. She reacts with violence, is unforgiving to others and harms herself when it gets too much. It's a story that doesn't shy away from the ugly sides of humanity, society and the human mind and I loved that. It's a brutal story and this read won't be for everyone, but for some, the darkness of it will make it cathartic.

Yokoi is a manga artist who spends his nights delivering newspapers just to make rent, since his original works just don’t seem to sell. Suddenly, one day he gets a visit from Saito-san, a self-proclaimed fan of Yokoi's work who made the long journey to meet him. Yokoi quickly realizes that the things Saito-san sees, feels, and thinks about are different from most people… These two struggle together to find a place to belong in this unique slice-of-life!

Read the album
Add to cart
Added to your cart
V.2 - That's My Atypical Girl
(2)
$10.99
It's been two weeks since fanzine creator Yokoi and his fan Saito-san started living together. Saito-san sees and thinks about things differently than most people, so it takes all she has just to make it through the day, and she's finally done the thing she swore never to do... An unfolding tale of unsteady happiness for two people who find it difficult just to live.