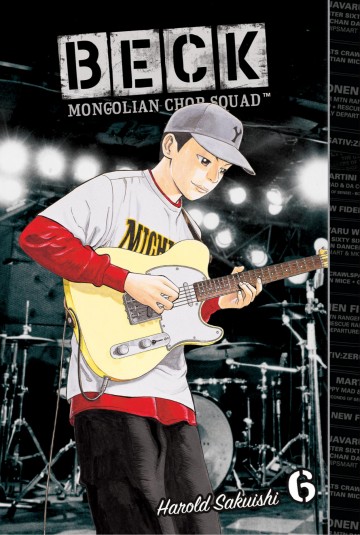 Beck just needs sixty-thousand yen and a microphone to record a demo! During a break from trying to earn some cash to cut the record, Koyuki and Saku decide it's not their place in the 9-to-5 world. They join Tanabe and Ciel Bleu—it's the school's Battle of the Bands, and time to rock out! Later, Koyuki realizes he's got to splurge for a new six-string, and he will do anything to buy one. But in his search for the perfect instrument, someone sends him a special message ... and when he realizes it's filled with more than just love, Koyuki knows he's got to be cruel to be kind. Will someone ... anyone ... call the karma police?

This digital comic is available in english version. The following reading modes are available with the izneo reader:
BECK- Volume 6 - BECK 6 - Harold Sakuishi - to read online on izneo or download on your iOS and Android tablet or smartphone.

Read the album
Add to cart
Added to your cart
V.20 - BECK
(0)
$10.99
As BECK continues to desperately drag themselves out of the muck, one day, they get an unexpected offer from Game of Death to play their new event! With the organizers behind them, there's no way Koyuki and the guys can let this chance to to waste. Soon after, they get a call from Ryusuke, who annnounces he's finally coming home...on the day of the show. Will he make it in time for the five of them to play on stage together again? With electric bands popping off on stage one after another, can BECK manage to pull of a solid show and set themselves apart from the pack?!

Read the album
Add to cart
Added to your cart
V.1 - BECK
(0)
$10.99
Become a super reader
Write reviews and get comics for free!

BECK- Volume 6 - BECK 6 - Harold Sakuishi - to read online on izneo or download on your iOS and Android tablet or smartphone.
Coming soon

Read the album
Pre-order
Added to your cart
V.14 - Seven Shakespeares
(0)
$14.99
The theater war reaches its climax with the return of the once- abandoned play Richard III. London, the city of theater, thirsts for the story of a conqueror! With Shakespeare at the helm, the Lord Strange's Men have the Admiral's Men up against the wall. Right up until the final performance, it remains unknown who will bear the crown of victory. Which company will win over the audience? A world-changing face-off begins in this full-scale historical epic about the man who rose from nameless country bumpkin to become the greatest poet in the world! Sparks fly in the eleventh volume of this all-new manga from Harold Sakuishi, author of Beck and Gorillaman!