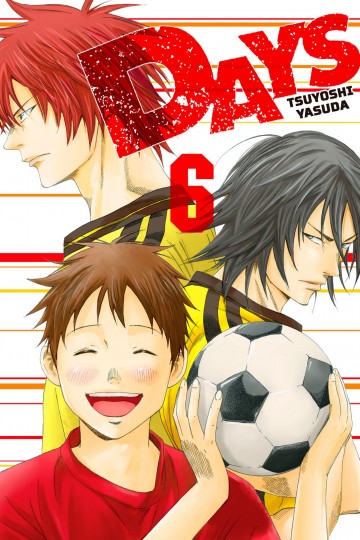 The Seiseki Soccer Club faces stiff competition at training camp as they brace themselves for the second half of the deciding game! It’s a fight to see who makes the team, but as it heats up, Tsukushi begins to lose faith in himself. He’s been told to find a weapon that’s his and his alone…but what could it be? And what awaits Seiseki in their match against Seikan, a team that stands shoulder- to-shoulder with the strongest teams in Japan?!

This digital comic is available in english version. The following reading modes are available with the izneo reader:
Days- Volume 6 - Days 6 - Tsuyoshi Yasuda - to read online on izneo or download on your iOS and Android tablet or smartphone.
Coming soon

Read the album
Pre-order
Added to your cart
V.26 - Days
(0)
$10.99
They promised themselves they wouldn't falter...and now, after giving up three crushing early goals to Ryozan Academy in the second round of the All-Japan High School Soccer Tournament, Seiseki find themselves on the verge of a comeback in the eleventh hour. And it's all thanks to Tsukushi, who's finally ready to transcend his weakness and run hard enough for the whole team. Can he show Seiseki the way and tie up the game?!