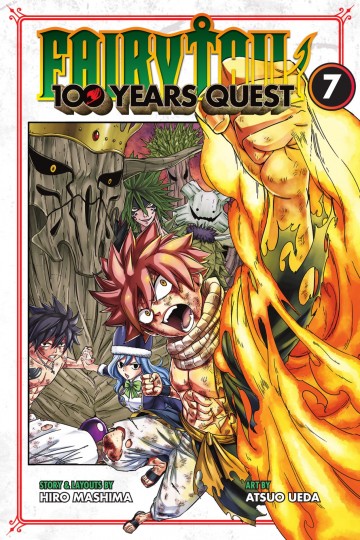 Multiple battles rage on Aldoron’s back as Fairy Tail wizards ﬁght the God Seeds. Now free from the White Mage’s spell, more and more Fairy Tail members join the ﬁght, and an unexpected ally gives Gajeel a gigantic boost. But everyone is battered and weary from ﬁghting the Diabolos wizards and amongst themselves while under the White Mage’s thrall. Is Fairy Tail’s talent for destruction enough to bring down a dragon god the size of a city?

Read the album
Pre-order
Added to your cart
V.9 - Fairy Tail: 100 Years Quest
(0)
$10.99
MOONLIT WATCH PARTY After being defeated and captured by the Moonlight Divinities, Natsu’s team is served up to Selene to provide entertainment. The Moon Dragon God has a twisted sense of pleasure and ﬁrst enjoys watching Natsu and Gray struggle to free themselves before sending them to the bottom of her mountain to ﬁght their way back up to her. Although Natsu and Gray are eager to ﬁght, things change when they discover they’re up against Lucy, Erza, Wendy, Happy, and Carla, who have been transformed into Yokai by Yoko!