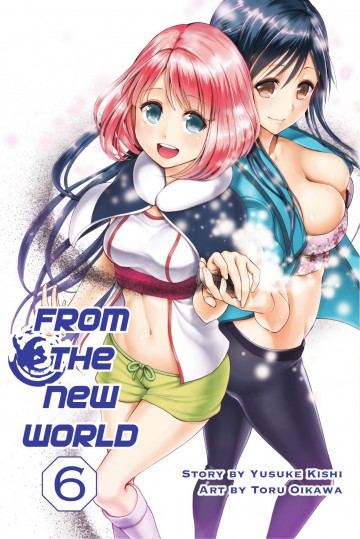 From the New World is originally set in a Japan a millennium from now. Five teens—Saki, Satoru, Maria, Mamoru, and Shun—have been born and raised in a tranquil town that can be described as a utopia overflowing with water and foliage. The world is ruled by people who have the “cursed power” or the “gods’ power” of telekinesis. After a certain incident, Saki and the others come to realize the true nature of their world. Before long, they learn everything, including the bloody history that brought humanity to this state. The five throw themselves into life-threatening adventure and fight to protect friends and a world on the brink of collapse.

This digital comic is available in english version. The following reading modes are available with the izneo reader:
From the New World- Volume 6 - From the New World 6 - Yûsuke Kishi - to read online on izneo or download on your iOS and Android tablet or smartphone.

Read the album
Add to cart
Added to your cart
V.7 - From the New World
(0)
$10.99
Saki Watanabe is growing up in a world 1000 years into the future, when people have developed powerful psychic abilities, and a supposedly utopian Earth plays host to a terrifying array of nonhuman, genetically engineered creatures. As Saki and her friends work to develop their telekinetic skills, they also uncover the guarded history of just how humanity metamorphosed into the New World in which they live. Originally an award-winning novel by renowned sci-fi/fantasy author Yusuke Kishi, From the New World has been adapted for manga by Toru Oikawa. This grand tale of mankind’s destiny after obtaining superhuman gifts also conveys deep themes about the driving forces in life. In this final volume, Saki and her companion Satoru are on the run and humanity is truly on the brink.

Read the album
Add to cart
Added to your cart
V.1 - From the New World
(0)
$10.99
Special selection!
Action, Adventure and Battles!