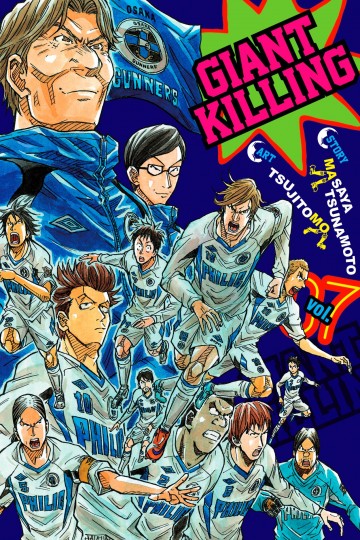 This digital comic is available in english version. The following reading modes are available with the izneo reader:
Giant Killing- Volume 7 - Giant Killing 7 - MAX GLADSTONE - to read online on izneo or download on your iOS and Android tablet or smartphone.

Read the album
Add to cart
Added to your cart
V.28 - Giant Killing
(0)
$10.99
Tsubaki and Akasaki have been picked for Japan's national U-22 men's team. Between the cryptic message Tatsumi left them with and a whole litany of new teammates at training camp, Tsubaki begins to feel the pressure of representing everything Japan can do on the pitch...but a chance encounter with a former rival in the league helps him see things in a different light. And just in time, too, because the qualifying matches looming ahead will decide whether Team Japan will play in the Olympic Games!

Giant Killing- Volume 7 - Giant Killing 7 - MAX GLADSTONE - to read online on izneo or download on your iOS and Android tablet or smartphone.

Read the album
Add to cart
Added to your cart
Bankshot
(0)
$11.99
A past betrayal has primed Marcus King for revenge--and now that he has been given enhanced abilities, the fuse is lit! From the mountains of Ukraine to a lush tropical island, no place is safe from his vengeance Marcus King: modern-day Robin Hood or terrorist? Maybe both? When Marcus comes face to face with an adversary who knows all of his carefully buried truths, he's forced to become the man he has always pretended to be. God help his enemies!