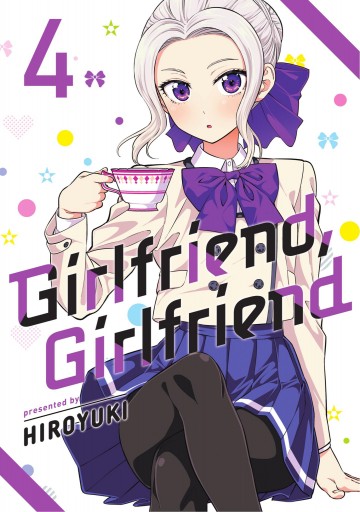 In the Ottoman Empire, sultans had harems - lots and lots of concubines at the sultan’s whims and whistle. One of them all was the favorite - the harem’s leader and the one whose son was expected to become the next sultan. Well, “Girlfriend, girlfriend” doesn’t go that far, but we already start seeing the beginning of a hierarchy between the girls. Which is actually a good thing, because, you guessed it, a new girl arrives : ) This being a hot springs story, naked girls and clumsy innuendos abound, and there’s also a flashback sequence that fleshes out Nagisa’s character - some of her weird actions from earlier volumes make more sense now. The question to be answered in the next volume is - will Shino, Saki’s friend, really do her best to destroy Naoya? Or will she join the harem, too? A funnier volume than the last one, and a volume that tries to veer towards realism, just a little.

Milika forcefully steals Naoya's first kiss, leaving Saki and Nagisa absolutely devastated. In order to deepen their bond, Naoya decides to take the two girls out on a vacation date to the hot springs! But for some reason, Nagisa is keeping her distance from the two despite this being a vacation for the three of them! What's more, Saki's friend, Shino, intervenes on their trip, determined to find out if Saki's being two-timed!! What's in store for these three on their much-anticipated date?!

Read the album
Add to cart
Added to your cart
V.7 - Girlfriend, Girlfriend
(2)
$10.99
A mysterious camp set was delivered to Naoya’s home! So since they’ve got it, why not go camping?! But to their surprise, this was all a trap laid out by Milika! She’s ready to do anything to have Naoya’s attention. Now that Naoya knows that Milika will never give up, and she will continue charging her feelings straight at Naoya, what choice does he have left?! This is a Milika-packed volume, all about her strategies to have Naoya for herself!

Add to cart
Added to your cart
V.1 - Of Girls, Love, and Money
(0)
$3.59
The practice of "giving financial support in a relationship" is common in Japan among older men and younger women... but between two girls in high school!? Witness the silly shenanigans of Sachiko as she finds all manner of ways to milk as much money out of her girlfriend, Miho, as possible!