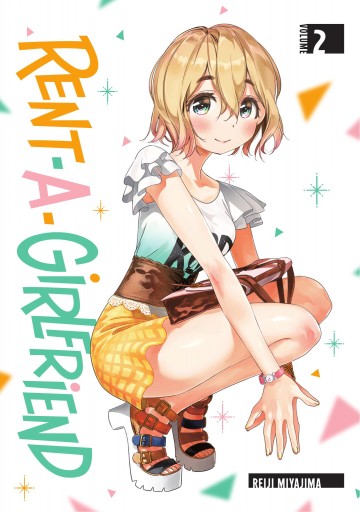 Well, well, looks like there's a real man underneath that "lame undecided Kazuya'' mask. This volume starts with a character-defining clash between Kazuya and his ex-girlfriend - and moves on at a blistering pace on a rollercoaster of emotions. It's a Mami (ex-girlfriend) vs Chizuru (rented girlfriend) battle -with each of them having VERY different plans for Kazuya, will our main hero finish this volume unscathed? :) Also, which one does Kazuya really like, after all? Obviously, Kazuya wants peace, quiet, and true love, but with one accidental meeting after another, his goals seem further and further away... The 2nd volume’s plot is more elaborate (with flashbacks thrown on top of the mazy intrigue and lots of questions unanswered), the art is just as pretty to look at as the first volume, and it even turns up the heat with detailed and humorous descriptions of the effects of hormones on virgin males :) (yes, this volume has quite a few ecchi scenes - ecchi means playfully sexy / nasty and refers to panty shots, bra shots, and images that convey sexual tension, but no sexual acts and no full frontal nudity.) Very fun, quick read, filled with gags and lots of tiny little amusing details to hunt during your second read through - although that HUGE cliffhanger will make you want to read volume 3 ASAP.

THE GIRLFRIEND RENT-ALITY As Kazuya and his rental girlfriend’s lives become more and more intertwined, their feelings become as complicated as ever. After awkward encounters with their family and friends, who now think they’re really dating, and a heated exchange with Kazuya’s ex, the best thing to keep their relationship “professional” might be taking some time apart–but fate may have other plans…

Continue summary
Rent-A-Girlfriend- Volume 2 - Rent-A-Girlfriend 2 - Reiji Miyajima - to read online on izneo or download on your iOS and Android tablet or smartphone.
New

Read the album
Add to cart
Added to your cart
V.9 - Rent-A-Girlfriend
(1)
$10.99
After Ruka’s disastrous overnight stay, Mizuhara’s been keeping her distance from Kazuya. The hopeless young man seeks to get back in her good graces by ﬁnding the perfect gift for her fast-approaching birthday. However, when the two unexpectedly meet at a drinking party, they’ll have to reconcile quickly to keep their relationship a secret!