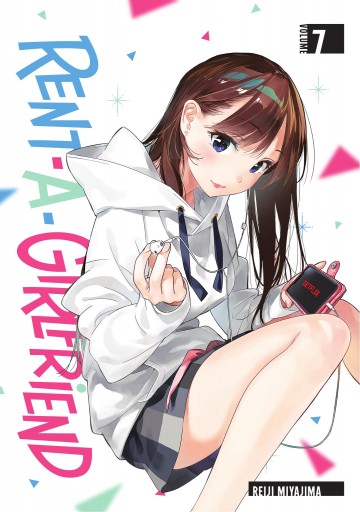 Alright, so Kazuya finally spills the beans and admits what we knew since volume one - he’s in love with Chizuru! (Big reveal, I know. NOT.) It’s too late, though - Chizuru wants to stop being a rental girlfriend… Seeing those two heartbroken and lonely in their adjacent rooms was perhaps this series’ lowest point so far - which means there’s only one way to go. Up! And what best way to restart the story than using a new facet of Chizuru’s personality - her actress self is amazing, and Kazuya falls in love with her again, alongside the whole theater’s audience. Then how come Chizuru is still so unsure of herself? And can Kazuya help her fulfill her dreams? It won’t be so easy, though, with obstacles like Sumi the shy newcomer, Kazuya’s father, and.. Ruka-Chan, I really enjoyed the ending, the two protagonists finally acting naturally on a date that’s not actually a date. A great volume that kind of restarts the series, shifting the balance of power between the protagonists. Is Kazuya finally manning up? Fun times.

Mizuhara plans to quit her rental girlfriend job to pursue an acting career, and Kazuya, ﬁnally aware of his feelings for her, is left unsure of what to do. Without their pretend relationship, the pair are nothing more than neighbors…right? After taking some time to reﬂect (and stalking Mizuhara by secretly watching one of her theater performances), Kazuya is ready to let his feelings go. However, a sudden invitation from Mizuhara to spend an off-the-clock evening together throws him for a total loop. Could this be the long-awaited chance to push past the client/rental barrier and become something more?

Continue summary
Rent-A-Girlfriend- Volume 7 - Rent-A-Girlfriend 7 - Reiji Miyajima - to read online on izneo or download on your iOS and Android tablet or smartphone.
New

Read the album
Add to cart
Added to your cart
V.9 - Rent-A-Girlfriend
(1)
$10.99
After Ruka’s disastrous overnight stay, Mizuhara’s been keeping her distance from Kazuya. The hopeless young man seeks to get back in her good graces by ﬁnding the perfect gift for her fast-approaching birthday. However, when the two unexpectedly meet at a drinking party, they’ll have to reconcile quickly to keep their relationship a secret!