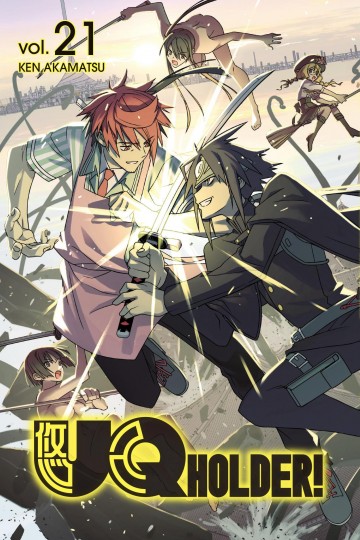 While Nikits occupies Tota, the Senkyokan comes under attack. Jinbei and Juzo put their relationship to the test as they face off in a fight to the death. Can Jinbei defeat Juzo’s 800 years of sword mastery to awaken his friend from Ba’al’s control? Clashing with the boy he once saved, Jinbei reveals the true nature of his Switcheroo. And, at a climactic moment, Tota arrives just as Dana–his old master–appears out of nowhere. She may no longer be the teacher he once knew… The UQ members must unite to face their greatest battle yet!

This digital comic is available in english version. The following reading modes are available with the izneo reader:
UQ HOLDER!- Volume 21 - UQ HOLDER! 21 - Ken Akamatsu - to read online on izneo or download on your iOS and Android tablet or smartphone.
New

Read the album
Add to cart
Added to your cart
V.24 - UQ HOLDER!
(0)
$10.99
TO THE TOP AND BEYOND... After Tо̄ta defeats the Fushi-Gari targeting Kurо̄maru, the Shinmei reveal a big secret. They have located Ialda and also calculated when she will activate her ultimate spell, Cosmo Entelekheia. With this information in hand, the time has come for UQ Holder to ﬁnally confront Ialda and end her for good. Once the ﬁnal preparations have been made, UQ Holder will depart from the top of the tower to Pluto. Tо̄ta will ﬁnally achieve his dream of reaching the top of the tower as a ﬂeet of spaceships await to take UQ Holder to battle. However, his dream may become a nightmare...

Add to cart
Added to your cart
C.189 - UQ HOLDER!
(0)
$0.99
Subscribe to this series and get chapters automatically delivered to your library when they're released. You won’t get any prior issues, backlist items, or collections. New chapters only. THE LONG-FATED DUEL To get the drop on UQ Holder's true enemy, Fate Averruncus, Tota and the others head for Ama no Mihashira. At first, UQ Holder feels helpless before Fate's overwhelming strength, but then, with some help from Kiri''s abilities, they manage to seize him! At last, for the first time in 20 years, Fate and Evangeline meet again. The moment their eyes lock in confrontation, the two hurl themselves into battle

UQ HOLDER!- Volume 21 - UQ HOLDER! 21 - Ken Akamatsu - to read online on izneo or download on your iOS and Android tablet or smartphone.

Read the album
Add to cart
Added to your cart
V.19 - UQ Holder
(0)
$10.99
WHO NEEDS WHO The day of Karin’s reckoning has come, as she must confront her own demons and finish her centuries- long battle with Evangeline. But who is needed to finally settle these old scores? What’s more, this isn’t the only dark past that will come back to haunt the members of UQ HOLDER, as the lines between good and evil become more and more blurred. Amid the cosmic clash of forces, the members of UQ HOLDER become further entangled with new contracts, new pactios, and all that comes with them. It’s both hard and easy to forget when you live so long…