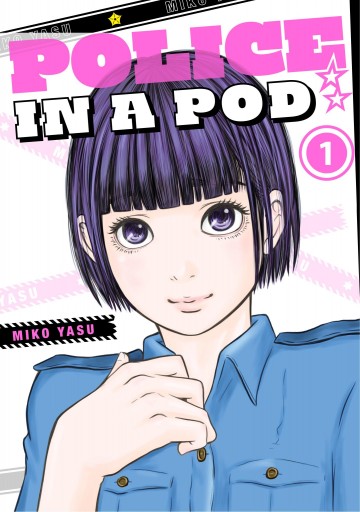 Mai Kawai is a young police officer that feels underappreciated, exhausted and plainly sick of the old-school, macho atmosphere at work. The very day she took her letter of resignation to the police box, she met her new boss - Seiko Fuji, a former ace detective that was demoted to regular police work for bullying her subordinate (a story that clashes with the way Fuji normally acts). Fuji will turn into a real role model for Kawai, teaching her the ropes and helping her find the good and the beautiful hidden in the often ugly and ungrateful police work. “Police in a Pod” is a collection of unconnected short cases, each of them teaching a different life lesson - for example, from the first chapter “burglars target neighborhoods where they often see two kids on the same bicycle - when people break rules, they’re not paying attention to other people breaking rules, either, so it’s easy for burglars to not get noticed”. The cases range from serious (helping a young prostitute find a safe place for herself) to funny (the police women making fun of their “neanderthals” male colleagues) to weird (I had no idea normal policemen have to handle corpses in Japan) and emotional (putting a delinquent kid on the straight path by showing him the drama hidden inside his own family) - a good mix that means the book is never boring, even if there’s very little real action (and plenty of conversations instead)

Police in a Pod Vol 1 by Miko Yasu is a story about the taxing but important job the police corps do. Female police officer Kawai thought being a police officer would be an easy and steady job. Instead, the work environment is full of macho men that like to abuse their power over newcomers, just like she's also met with harsh words from the citizens she's trying to help. It do for sure takes a special kind of human to withstand the hate-against-authorities. She's about to hand in her resignation letter when she meets her new senpai Cheif Fuji. Rumours have it that she was demoted because she used her power to abuse a younger detective (I hope we will learn more whether this is true or not in the next volume. Seems very out of character for her) Chief Fuji are a champ at her job, and her encouragement and happiness to do her job inspire Kawai, and she and we learn the importance of her job. The story is kind of small stories in each their way, but there is like a red thread that makes them connect. We get to see what a police officer (in Japan) do and we are taught important messages underway. It makes it a heartwarming story as we learn about the most important job a police officer can do – always be kind and not judgemental.

Female police officer Kawai had enough of a career she wasn't even that into and was about to hand in her registration, when the unthinkable happened—she met the new, female director of her station! And after spending a little time with this gorgeous role model, Kawai realizes that maybe she isn't quite done being an officer after all.

Continue summary
Police in a Pod- Volume 1 - Police in a Pod 1 - Miko Yasu - to read online on izneo or download on your iOS and Android tablet or smartphone.
New

Read the album
Add to cart
Added to your cart
V.5 - Police in a Pod
(1)
$10.99
“We’re always working while others are having fun…” Police officers want to have fun, too. But, there’s no end to the work. From summer festival security and molestation investigations to police questioning and gun fights, there are plenty of tasks to struggle with and withstand while on duty. After all that hard work, will they finally achieve policeman’s high…?

Read the album
Add to cart
Added to your cart
V.1 - Police in a Pod
(2)
$10.99
Special selection!
Action, Adventure and Battles!