Roy of the Rovers Classic 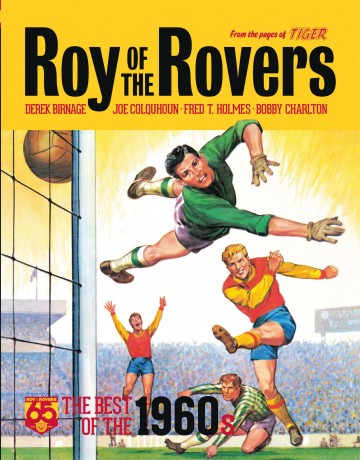 The sixties are a defining decade for Great Britain. London is becoming the cultural mecca of the world, the Beatles are dominating the music charts, and in 1966 England will lift the World Cup for the first time. It’s also a period of great turmoil for Melchester Rovers and their super-striker captain, Roy Race; from a saboteur within the club burning down the dressing room, an obsessed fan trying to ruin their cup run and the Rovers crash-landing on a small South American Island, the team will have to face down problems which threaten their very existence! The swinging-sixties come to life in this action- packed footballing epic! Experience the highs and lows on and off the pitch with Roy and Melchester Rovers, brought to you by comics’ legend Joe Colquhoun and World Cup winner Sir Bobby Charlton.

Read the album
Add to cart
Added to your cart
Roy of the Rovers: Best of the '50s
(0)
$15.99
On September 11th 1954 a new weekly sports anthology comic called Tiger was launched in the UK. It’s lead strip, Roy of the Rovers – a story starring a young footballer called Roy Race who played for Melchester Rovers – quickly became a fan favourite. This incredible collection with never-before reprinted stories charts the early days of Roy’s association with Melchester Rovers, from the highs of signing for the club he supported as a boy to the lows of having his boots stolen before a big game! Experience the first decade of Melchester’s greatest soccer sensation in this glorious football action on and off the pitch!

Read the album
Add to cart
Added to your cart
Roy of the Rovers 65th Anniversary Special
(0)
$6.99
#StayAtHome

Read the album
Add to cart
Added to your cart
V.3 - Charley's War
(1)
$15.99
After killing former comrades as part of a firing squad, Charley has joined the Stretcher Bearers in an attempt to save lives rather than take them. But he soon finds himself back behind a rifle reunited with ‘The Scholar’ as his new officer, while an entrenched group of German soldiers engage them in a sniper stand-off! Meanwhile Charley’s younger brother Wilf has his own struggles in the skies, as an observer with the Royal Flying Corps. Charley’s adventures take him through the final months of the War in Europe to the cold land of Russia, under the orders of his unjust superiors and their corrupt interests… This final volume concludes Pat Mills and Joe Colquhoun’s anti-war epic, a monument to the power of comics